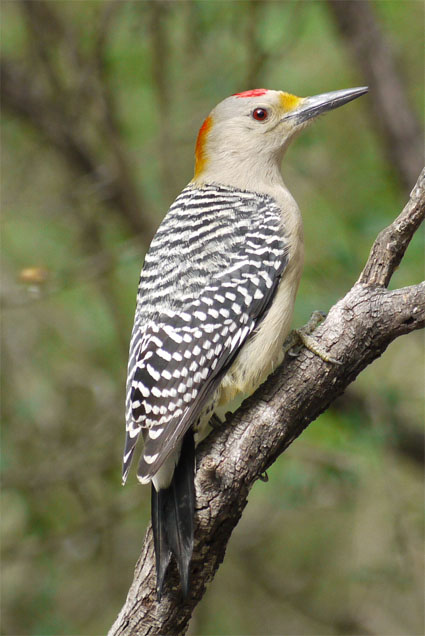 Have you ever wondered why woodpeckers don't pass out after scrounging a meal from a tree? Their little brains, after all, undergo decelerations of 1200g as they bang their beaks against the wood--over ten times the force needed to give a human a concussion. Now scientists are learning how to harness the woodpecker's special abilities not to prevent headaches, but to safeguard our gadgets. Researchers at the University of California, Berkeley, analyzed CT scans and video footage of the golden-fronted woodpecker (Melanerpes aurifons) to design better shock absorbers. They found that woodpeckers have four traits that ease their noggins: fluid between the skull and brain, a beak that is slightly elastic, a section of soft skull bone, and a bone called the hyoid, or lingual bone, which is also somewhat elastic. The scientists then constructed a woodpecker-inspired shock-absorbing system around a circuit using materials that approximated the bird's four absorbers. For example, rubber represented the supportive and slightly-elastic nature of the hyoid bone, while aluminum mimicked the brain-skull fluid. With the circuit securely surrounded, they stuffed it inside a bullet and fired the bullet at an aluminum wall using an air gun. The result? The shock absorber offered effective protection against blows as high as 60,000g. As New Scientist reports:

"We now know how to prevent the fracture of microdevices from mechanical shock," says Yoon. "An institute in Korea is now looking into some military applications for the technology."

This new technology has an array of possibilities: It could be used in airplanes' black boxes, in cars, or in satellites and spacecraft. From New Scientist:

Nick Fry, chief executive of Formula One team Mercedes GP Petronas based in Brackley, UK, says such ideas could feed into crash protection for drivers taking part in motorsport: "One big issue with Formula One is protecting the driver by getting them to decelerate in an accident situation in such a way that his internal organs and brain aren't turned to mush.... We do that with clever design of composites, very sophisticated seatbelts and a head and neck restraint system," Fry says. "But this research might be something we can draw on in future – it could be very interesting."