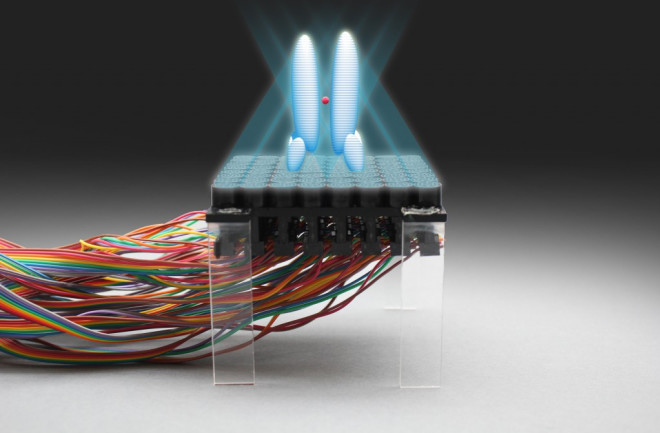 Scientists created acoustic holograms with shapes such as tweezers, twisters and cages that exert forces on particles to levitate and manipulate them. (Credit: Asier Marzo, Bruce Drinkwater and Sriram Subramanian) It’s a classic science fiction scene: A large vessel moves near a smaller one, captures it in a so-called tractor beam, and pulls it inside. Now imagine bringing that technology to life, but instead of moving meddlesome space ships, terrestrial tractor beams would perform touchless assembly, microsurgery or deliver drugs directly to the body part that needs them. You may not have to imagine for long: A British research team is making early strides toward developing small-scale tractor beams, using high-amplitude sound waves to create invisible force fields they can adjust in real-time.

It took months to get right. “When the experiments were not working (for about six months) they were some of the most dispiriting you could think of,” stated Bruce Drinkwater, a professor of ultrasonics at the University of Bristol. “Imagine repeatedly dropping small polystyrene spheres and watching them fall, or fire off in the wrong direction. So, when Asier (Marzo) showed us it working, we were speechless.”

He shook the hands of everyone present, then said “This will get us into Nature.” And, it did. Their research, published today in the journal Nature Communications, was a collaboration between the universities of Bristol and Sussex, and Ultrahaptics, a company developing technology that uses acoustic waves to create a virtual sense of touch. The team set up an array of 64 miniature loudspeakers, each sending out sound beyond the range of human hearing, to create an acoustic hologram that could surround objects and hold them in place. By changing the speakers’ output, they could set up various acoustical force fields that functioned like fingers, twisters or cages, and then use them to manipulate the objects.

The method won’t work in the vacuum of space where sound can’t travel, but they have plenty of ideas on where to go next. Drinkwater stated they are working to miniaturize the system, making it capable of working with incredibly small particles. “We have in mind cells and drug-holding micro-capsules,” Drinkwater stated in an email. “If we could manipulate these within the body, e.g. to deliver drugs to tumors, this would be hugely important.” The waves could theoretically be used to manipulate blood clots, kidney stones, microsurgical instruments or to move cells inside the body without any incisions, wrote Marzo, a PhD student at the Public University of Navarre. He also sees viability for the technology in space, controlling floating objects in zero-gravity environments in which astronauts work. “The possibility of holding and manipulating objects from a distance and without physical contact is intrinsically exciting,” Marzo stated in an email. “It can be something mundane like levitating the remote control from the table to your hand, or something incredibly sophisticated like tangible displays composed of millions of levitating particles acting as pixels. And why not? I like the ultimate vision of rearranging asteroids or building things atom by atom.” [embed]https://www.youtube.com/watch?v=s5r2nmvxA4s[/embed]