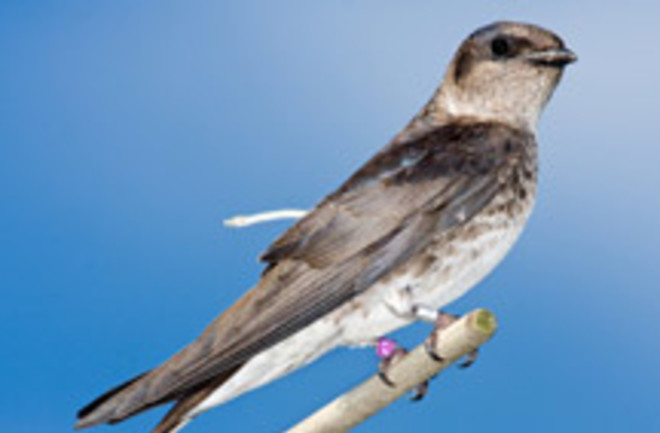 The songbirds that live in the backyards and parks of the northeast United States have just earned a little more respect. Researchers strapped cutting-edge geolocator devises to the backs of purple martins and wood thrushes to track their migrations, and found that the diminutive warblers can fly more than 300 miles each day, tripling previous estimates. But researchers say the biggest achievement was proving that the new technology works, which lays the groundwork for future studies of small birds.

"Never before has anyone been able to track songbirds for their entire migratory trip," explained co-author Bridget Stutchbury.... She said that most songbirds were too small to be fitted with conventional satellite tracking devices, so the team mounted miniature "geolocators" on the birds [BBC News].

Each tiny bird backpack weighs less than a dime, and contains light detectors that record each day's sunrise and sunset times, and also record where the bird is in relation to the sun. When the researchers retrieved the monitors, they used that data to calculate where the birds had been, and when they were there. The results, published in Science [subscription required], surprised researchers on several counts. They discovered that the

birds fly two to six times as fast heading north in the spring as they do heading south in the fall, perhaps in a competition to reach the best breeding sites and attract the fittest mates.... One industrious female martin flew the 4,660 miles from the Amazon basin to Pennsylvania in only 13 days -- with four of them spent on stopovers [Los Angeles Times].

Researchers also discovered that Mexico's Yucatan peninsula is an important stopover point for birds traveling in both directions. The researchers tagged 34 birds in the summer of 2007, carefully catching the birds in nets and then attaching the monitors with loops that went around their legs. In the summer of 2008, researchers found seven of the tagged birds and recovered the chips. Stutchbury said that she

and her colleagues had tried not to draw too many conclusions because they had data from only seven birds. Still, she said, “that’s seven more than anybody else.” Last summer, she and her colleagues applied sensors to dozens of more birds. The work is important, she said, because songbird species are already in steep decline and climate change may threaten crucial habitat [The New York Times].