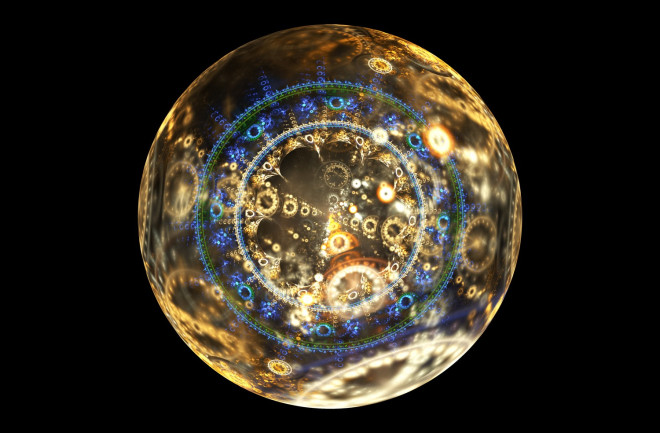 Crystals form when energy is removed from certain materials forcing them to adopt new spatial structures. A key property of crystals is that when they form, symmetry becomes broken. Instead of the material being the same in all directions, it is the same only in some directions. It forms a periodic structure.

Back in 2012, the Nobel prize-winning physicist Frank Wilczek and his colleague Al Shapere struck on an interesting idea when contemplating this phenomenon. They reasoned that the laws of physics are symmetrical in time as well as in space, so this kind of behaviour should not be confined to spatial dimensions alone. Similar periodic structures, they decided, ought to appear in time as well. They called these structures time crystals.

That was an entirely theoretical leap into the unknown. But it triggered a flurry of head-scratching among physicists who began working out how to build time crystals. In 2016, they achieved it with a string of ytterbium ions cooled to their ground state but still able to interact with each other.

The interaction works like this: each ion spins in a particular direction which can be reversed by zapping it with a laser. When this happens, the change in spin causes the spin of the next ion to flip followed by the next and so on, in a chain reaction. Indeed, the chain can be made to oscillate at a rate that depends on how often it is zapped.

The key discovery in 2016 was that the oscillation also occurs at double the driving frequency. Ordinarily, that would be a puzzle because the ions are ultracold and have no other source of energy.

But Wilczek and Shapere say this is exactly what you expect from a time crystal. Instead of being constant in time, time crystals vary over time at specific rates, in this case at double the driving frequency.

Of course, this is a difficult and rather esoteric experiment to perform. It requires the creation of a specific quantum system that can be controlled in precise ways, in this case ultracold ions.

Now Joe Randall and Conor Bradley at the quantum computing start up QuTech in The Netherlands, with colleagues elsewhere, have found another, much more general way to create a time crystal. And the machine they have used to do it is a quantum computer.

The common view of quantum computers is that they are powerful information processing devices that can break codes and perform mind-boggling calculations. But these machines also perform another neat trick: simulations.

Physicists have long known that the behaviour of a quantum system does not depend necessarily on the stuff it is made from—the atoms and electrons and photons and so on. Instead, its behaviour is determined by its quantum state, a mathematical description of the way these entities interact.

That’s why quantum computers are powerful simulators. The computer—whether it be based on ions or photons or nuclear spins or whatever—simply has to be prepared in the same quantum state as the object to be simulated. Researchers have been doing this for some time to study all kinds of properties of atoms, molecules, proteins and so on.

Now Randall and Bradley and colleagues have simulated a time crystal by setting up their quantum computer in the same quantum state that a string of ytterbium ions adopts when it behaves this way. And sure enough, they find that the simulation behaves in exactly the same way too. They observe the characteristic doubling of the oscillation rate that is the signature of a time crystal.

Interestingly, another group at Google have announced a similar result, albeit a few weeks after the Qutech team.

That’s work that has interesting potential. Time crystals can be thought of as a form of quantum matter. But there are other forms out there too, such as topologically protected states that are useful in error correction.

These have proved difficult to create in other circumstances. But the same techniques used to simulate time crystals might allow these other exotic states to be created in quantum computers too. Where this might take us is anybody’s guess.

Time crystals and topologically protected state are interesting quantum tools. The question now is what to build with them.