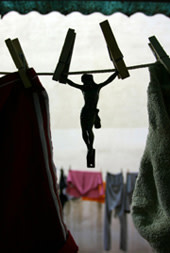 This week, Newsweekjoins the rising tide of forums holding the "God Challenge": pit a religious figure (generally of the Christian persuasion) against a hardcore atheist, and let them battle it out over the existence of God. This week's contestants are mega-preacher Rick Warren, of California's Saddleback Church, and Sam Harris, philosopher and author of The End of Faith and Letter to a Christian Nation, with editor Jon Meacham acting as referee. The conversation, for the most part, sticks to the general formula: Is there a God, what evidence do we have either way, should the Bible be interpreted literally, does prayer really "work." No surprise, the points and counterpoints meet with the same language barrier that dominates nearly all of these attempts to "translate" religion into rational terms, and vice versa. Harris, for his part, is no stranger to debates like these, and holds his own through questions about the existence of secular morality and the ability to be spiritual without believing a doctrine. He does, however, fall into the paternalistic "I know better than you" trap that can't help but alienate the billions of humans who do believe in God. Telling people they're stupider than you is simply never a winning strategy. Meanwhile, Warren makes a few interesting points about personal responsibility and divine justice. But he sets himself up as easy prey with exchanges like the following:

WARREN: One of the great evidences of God is answered prayer. I have a friend, a Canadian friend, who has an immigration issue. He's an intern at this church, and so I said, "God, I need you to help me with this," as I went out for my evening walk. As I was walking I met a woman. She said, "I'm an immigration attorney; I'd be happy to take this case." Now, if that happened once in my life I'd say, "That is a coincidence." If it happened tens of thousands of times, that is not a coincidence. There must have been times in your ministry when you've prayed for someone to be delivered from disease who is not—say, a little girl with cancer.WARREN: Oh, absolutely. So, parse that. God gave you an immigration attorney, but God killed a little girl.WARREN: Well, I do believe in the goodness of God, and I do believe that he knows better than I do. God sometimes says yes, God sometimes says no and God sometimes says wait. I've had to learn the difference between no and not yet. The issue here really does come down to surrender. A lot of atheists hide behind rationalism; when you start probing, you find their reactions are quite emotional. In fact, I've never met an atheist who wasn't angry.

Which is essentially saying that sometimes you can control fate by "praying" to God, and sometimes you can't, but the act of surrendering control should only happen once you realize all those fervent prayers aren't being answered. That humans foolishly try to control nearly every aspect of life is a germane point—just look at the headlines to see how utterly out of control things are, despite our best efforts otherwise. But rather than explore this human tendency, and how religion alleviates/causes it, Warren heads straight for the defend-your-position-by-attacking-your-opponent tactic so reminiscent of modern political campaigns. Which, as we've seen, aren't exactly the paths to agreement and rational discourse.