Engineers unleashed a fleet of small drones to explore new, potentially dangerous spaces without a human controller or even GPS. 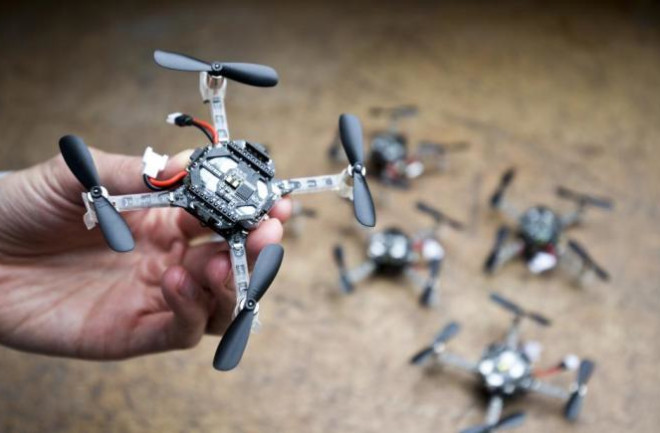 Each bot in the swarm weighs in at just over an ounce. (Credit: TU Delft / MAVLab)

In 2008, a fire ripped through the architectural building at Delft University of Technology (TU Delft) in the Netherlands. Firefighters got the burn under control, but afterward, the school wanted to know if any furniture was salvageable.

So Guido de Croon, an associate professor of aerospace engineering, flew a drone around the building to survey the damage. But he didn’t want to get too close; de Croon worried that if the remote-controlled drone lost signal, it would drop, irretrievable, into the wreckage.

The experience got de Croon thinking — could he devise a better bot to aid in a situation in which large, remote-controlled drones reached their limits? Maybe even something that could survey damage inside the building, without getting lost?

Eleven years later, de Croon and a team of engineers have created an algorithm that lets a fleet of small drones explore new spaces without a human controller or even GPS technology.

Their swarm robotics approach is different than the singular, camera-equipped drone that de Croon used in 2008, but it ultimately proved effective in exploring places that might be difficult or dangerous for humans to traverse on foot. The team tested their results on simulated search-and-rescue missions complete with dummies. Their study was published last Wednesday in Science Robotics.

Help From the Hive

The team started with a bot called the Crazyflie 2.0 – a palm-sized microdrone that weighs in at just over an ounce.

These are not your average high-tech, camera-equipped, GPS-navigating drones like others on the market. But de Croon says he didn’t want anything with GPS or AI-led steering mechanisms.

“If you look at insects, that’s not how they navigate,” he says.

The modified Crazyflie bots are small, lightweight and simple — so simple, in fact, that they have almost no memory. Instead, the tiny computers only note how quickly the landscape is passing by, in order to keep them from flying in circles. It’s modeled on how honeybees navigate.

“It’s only very short-term,” he says. “They’re not looking at the environment.” Although bees do note some of the landmarks around them when they fly, these bots are like an even simpler, more stripped-down version of the bugs.

To launch, the pack of drones flies from a wireless beacon. Each bot has a small sensor to tell how far away it is from the others. But they can’t locate exactly where they are, like on a GPS. This allows the bots to bumble around a room and explore its boundaries. Then, when their batteries drain to 60 percent, the drones fly back to the beacon, following the signal’s strength.

And de Croon says the bots, when faced with exploring that aftermath of a disaster, don't all need to return for their search to be effective.

“It’s a calculated risk, some of them just won’t come back,” he says. Much like honeybees, casualties will happen as members of the swarm go out to collect pollen. But even if a few disappear, the queen bee can still keep her hive alive and running.

Ideally, the bots could be used for situations in which it would be dangerous for a human to explore an area, like after that fateful architecture school fire. Or, possibly, even to rescue trapped victims in a building collapse.

But de Croon says the tiny drones could also be used for applications besides search and rescue. Right now, the TU Delft team is looking at ways to implement the technology into surveillance situations, like monitoring greenhouses or helping warehouses keep track of stock.

“They’re so lightweight and safe that the people … don’t really have to adapt,” he says.

He also says he is working on another project to help first responders determine the cause of a fire in a building.

And de Croon hopes other engineers take the results of the study and run with them. The code used for the autonomous drone fleet is open source, so other curious tinkerers can make their own creations.

But one of the limitations of swarm bots is that, due to their lightness, such a system would be ineffective when delivering medicine or supplies to someone in need. It makes them perfect for surveillance conditions, but other emergency situations might require a more heavy-duty bot to do some of the, erm, heavy lifting.

Engineers at TU Delft did make an emergency defibrillator bot in 2014. And some researchers believe these types of machines, which have even been commercialized by startups like Zipline to deliver medicine, are just the tip of the iceberg for emergency telemedicine. Flying drones in other settings — like crowded cities, for example — might even make emergency care more accessible.