The patch delivers soft touches to a wearer's skin, with potential applications in virtual reality, prosthetics and more. 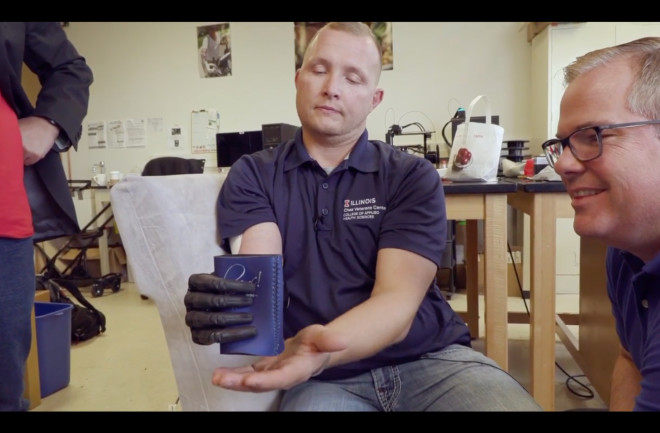 The skin patch helps a man pick up a beer sleeve with a prosthetic by giving him tactile feedback. (Credit: Northwestern University)

A new patchlike device that adheres to your arm, back or stomach might bring a sense of touch to virtual reality.

Developed by researchers across the U.S. and China, the device combines wireless technology with small nodes that press down on the skin. Interacting with a touch-screen translates into real-time sensations — tracing your initials, for example, would lead to feeling those letters being lightly brushed across your arm. The device showcases how future devices that mimic sensations might be useful not just for VR, but physical rehabilitation, says study co-author John Rogers, a biomedical engineer with Northwestern University.

Current VR technology mostly manipulates what we hear and see. That digital world is still mostly removed from our sense of touch, even though that sensation is a large part of how we interpret the world, Rogers says. “To leave that outside the realm of what we’re doing with technology today seems like a significant oversight.”

Rogers and his team demonstrated that their version of digital touch helped an amputee guide a robotic arm as it picked up a beer sleeve — he felt the fingertips on his arm, where the patch was. When a touchscreen is involved, individuals can trace patterns on the screen that, say, their grandmother or child can feel on their own skin.

Since touch has to be mimicked with devices that make contact with our skin, it provides a different design challenge than audio or visual cues, which operate from a distance. Rogers and his team addressed that unique need with eight layers of materials that variously interpret signals from the touch-screen, deliver mechanical pressure and make the device comfortable to wear.

Their work was published Wednesday in Nature.

The screen broadcasts a wireless signal through a modified version of the technology that allows touchless credit card payments, Rogers says. That signal tells the patch hardware how to move to recreate a touch. Electric currents flow through small coils of wire scattered throughout the patch, which in turn gently push magnets against a wearer's skin.

Power for the whole setup comes wirelessly as well, so theoretical users don’t have to worry about battery life. Right now, the device can’t deliver anything more forceful than a soft touch, Rogers says. The team is thinking about other versions that provide slight cooling, warming or even dripping sensations.

As the team investigates different and possibly more precise sensations, they see biomedical applications for this device. Individuals in therapy are testing a version of the current product at the Shirley Ryan AbilityLab, Rogers says. The rehabilitation and research hospital is seeing if the device might help stroke patients who have to relearn how to swallow. If the action isn’t timed right in the breathing cycle, people can choke. A mechanical component at the base of the neck might detect where patients are in their exhalation and let them know the right time to swallow.