Robots: They're (finally) just like us. Sweaty and a little shaky when working too hard. 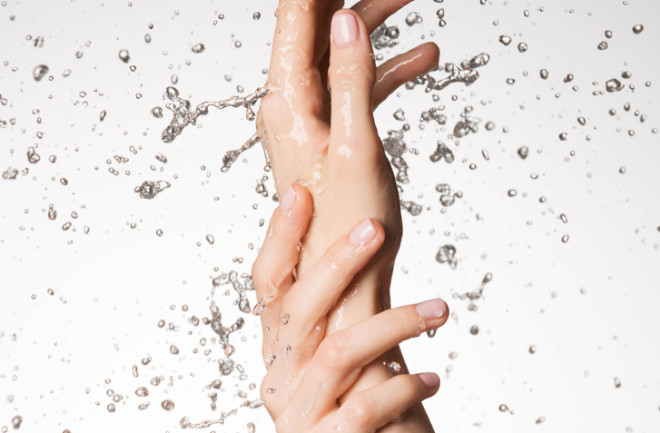 Sweating: It's not just for humans anymore. (Credit: Valua Vitaly/Shutterstock)

You know the feeling. You're working just a little harder than you thought, and suddenly your hands are slick with sweat. Thanks to new research, this hallmark of human physiology might soon be found in robots.

A team of roboticists and chemists have designed rubbery fingers that automatically drip water whenever their machinery gets a little toasty. The robot itself doesn’t regulate the trickle: Instead, it has a jiggly coating, analogous to human skin, with pores that open when they're heated, releasing the liquid inside. Researchers found that a fan blowing the “sweat” off the fingers cooled the robot down about six times faster than machinery with no sweat at all.

Described in Science Robotics, the slightly trembling, sweaty fingers seem timid — but they’re a confident step in the right direction toward designing robots with plastic, fabric or other insulating components. These robots will need a way to regulate their temperatures, something that doesn't require an internal computer, says study co-author Rob Shepherd, a roboticist at Cornell University. “Humans and animals have a lot of reflexes and autonomous things that our brain doesn't have a big say in,” he says. “That attitude towards robotics will be important.”

Like cars and computers, robots can overheat. If they don’t cool down, the gears can grind to a halt. Other roboticists have already shown that water coursing through machinery can keep it working — for instance, Kengoro the humanoid robot can do pushups indefinitely thanks to this system.

But Kengoro is basically all metal, and many researchers, including Shepherd, think that the future of robotics involves lots of softer materials. Like footpads on a cheetah paw, cushiony exteriors can enhance the dexterity and sensitivity of a robot. They also hold on to heat, just like how skin traps warmth generated from muscles, Shepherd says.

But could these soft materials sweat like animals, too? To test the idea, Shepherd and his team designed a coating for gripping robot fingers that's made of a plastic similar to what’s used in contact lenses. A pump embedded in each metal digit pushes water up to the surface of the material. The fingers don’t leak a drop until the heat generated by the grabbing motion warms the plastic up to 86 degrees Fahrenheit. The plastic relaxes, opening up its pores. Pressurized water streams out, cooling the fingers.

Sweating does slow down the robotic hand a little, and the water reservoir is limited. In a factory setting, someone would have to refill the fluid, Shepherd says, but people are already used to replacing coolants and gas in other devices.

In the future, the team wants to see whether the sweat can be put to further uses, like detecting chemicals. If a fluid flows out of robot hands and onto whatever it's manipulating, it theoretically could dissolve chemicals and even convey how much of each molecule is present — useful feedback for, say, farmers analyzing pesticides on crops.

But for now, the team is satisfied with a sweating robot that cools itself down autonomously — especially since it happened way faster than the researchers anticipated. “We’re just putting water on a hot surface and blowing air over it,” he says. “It should be expected, but we were still surprised because things never work out as planned.”