It can operate autonomously for over a day and a half, and even swims upstream at a respectable speed. 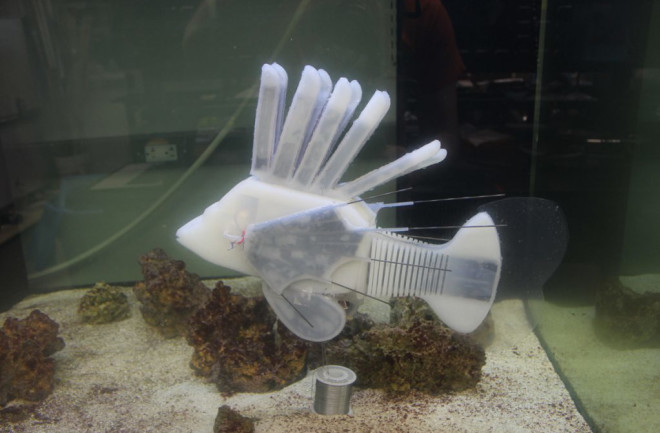 The robot fish in its natural environment. (Credit: James Pikul)

When it comes to designing better gizmos, efficiency is the name of the game. Why have two separate components to do two separate tasks, if you can have one do both? We have a whole bird-killing metaphor about how great it is to be efficient.

A team of engineers at Cornell and the University of Pennsylvania have created a soft fish-shaped robot whose blood does double duty as both muscles and battery. It can operate autonomously for over a day and a half, and even swims upstream at a respectable speed. The invention’s success is a boon not just for aquatic bot enthusiasts, but also for engineers looking for ways to improve efficiency in future robot designs — and anyone who’d benefit from this new and improved kind of liquid battery.

Their work appears today in a paper in Nature.

It sounds wild, but multitasking with batteries is not a new concept. For example, some forklifts use extra heavy batteries to help balance their weight, and some hi-tech machines use batteries as load-bearing, structural components. If only there were some kind of liquid battery technology, the paper’s authors mused, they might be able to approach the fantastic versatility and utility of human blood. “In addition to transporting oxygen and nutrients throughout the body, the circulatory system removes waste products, regulates internal temperature and cellular pH levels, and assists in fighting off disease and infection,” they write approvingly.

Well, it turns out such a technology does exist! Redox flow batteries basically do what your typical AAs do, only they make use of flowing liquids to bring about the chemical reactions that produce electricity. The authors realized such a battery could also double as a hydraulic system, capable of transmitting physical forces and producing actual movements within the robot’s body.

To show this doubling up of battery and hydraulics could work, the team designed and built a mechanical, autonomous robot fish — specifically, a lionfish. (“This concept can be generalized to other machines and robots,” they make clear.) Its flowing liquids simultaneously provide power to the fish’s pumps and electronics, while transmitting mechanical work to push around the fins, which lets it swim. Usually such liquid batteries use hard, rigid materials, but the authors chose a soft silicone body for the fish robot, which made it more flexible and better suited for its aquatic environment.

The finished product can swim unaided for over 36 hours, at more than 1.5 body lengths per minute upstream. And, the authors proudly add, “The robot can also fan its pectoral fins, a behavior that lionfish use to communicate.”

So what good is a robot fish? By itself, not much — though I’m sure it’s a great conversation piece, like something out of Blade Runner. (The authors even refer to the system at one point as “robot blood”!) But the real point of the machine is that the idea behind it is legit.

Their robotic lionfish illustrates that battery fluid is an effective hydraulic fluid as well, meaning that one system can power a robot in in two different ways — mechanically and electrically.

That means more efficient, and more versatile, robot designs are now possible. And while fine-tuning the battery chemistry, electronics and other details of the design may improve upon it even further, the underlying guts of it — literally — suggest a new kind of robot may soon walk, or swim, among us.