This Quadcopter Doesn't Mind Getting Wet 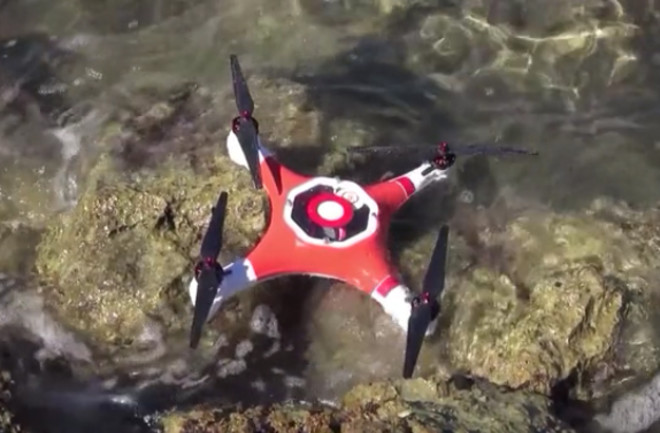 The Splash Drone is right at home at water's edge.  Credit: Splash Drone, via screengrab from Kickstarter Drones and water don’t mix; just ask Zwier Spanjer, the viral Internet star who dove fully clothed into a pond to save his beloved drone from certain death. For people who've sunk hundreds of dollars into a new toy, avoiding obstacles and open bodies of water goes without saying. But for amateur drone filmmakers that love surfing or other aquatic sports, avoiding water isn't so easy. But now there’s an affordable, waterproof solution. Watch the teaser video below to see it in action:

Over on Kickstarter, a group of drone builders have launched a campaign to fund production of the Splash Drone, a waterproof quadcopter that’s relatively easy on the wallet. If you pledge $799 you’ll get a ready-to-fly package, which is $400 less than the expected retail price of $1,199. Plus, you’ll be splish-splashing with your drone before anyone else. After several different prototypes, the folks at Splash Drone have completed the tooling and injection mold, and plan to ship out the first crop of these drones to Kickstarter backers in June or July. For the money, the Splash Drone comes with some fun and useful features. Fly with a traditional remote control version, or use an Android device to chart a mission path or activate the drone’s autonomous “Follow Me” mode. The Splash Drone also has a payload release system that allows you to deliver water balloons or refreshments from boat to boat. And speaking of boats, if you happen to be stranded or sinking, you can use the Splash Drone’s emergency flare adapter to float a distress beacon in the sky where it’s easily seen. So if you’re a drone pilot that likes to hang ten, then the Splash Drone is worth a look.