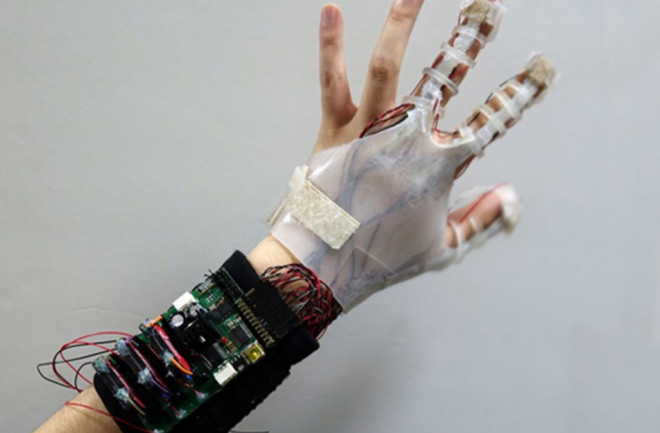 Our squishy human brains are notoriously easy to fool. Whether it’s optical illusions or more advanced trickery, it doesn’t take much to exploit our mind’s weaknesses. But, that’s also what enables virtual reality (VR) systems, where technology can effectively transport us to a digital world. And thanks to a newly developed VR glove, the effect might soon be better than ever.

A team of engineers in Korea has designed the new device, which is pretty much exactly what it sounds like: a lightweight and flexible glove that can effectively mimic the sensations of manipulating digital objects. The details appear today in Scientific Reports, where the authors describe using the glove to manipulate a “virtual hand” inside a digital realm. It’s a step forward not just for video games and novelty toys, but more serious technology as well.

VR gloves are not quite a brand new technology, but these mostly focus on translating movements into digital commands. Taking the input flow in the other direction — so a user can “feel” their digital environment — remains a more limited technology, which has typically focused on transmitting a sense of texture. That’s already pretty cool, but this new glove actually transmits the details of a virtual object’s shape to a user’s fingertips.

Like most such handwear, this VR glove uses sensors to tell the computer where the virtual hand should go, and actuators to provide some kind of sensation for the user’s (real life) hand. The sensors make use of piezoelectric technology, materials that produce an electric charge when squeezed. Line the glove with them, and every bend and flick of a finger produces a measurable electric pulse, which the software can translate into commands for the virtual hand.

But it’s the actuators within the VR glove that the authors spend the most time describing, since they developed them specifically for this project. Each one is, basically, a flat little air bubble encased in a thin silicone skin. By using an electric current to change the shape of the silicone, the researchers could force the air inside into a tighter space that “popped up.” Varying the signal changed the height of the bubble, and they could turn it on and off nigh-instantly.

It might not sound like much, but that little air bubble is the key. Put them in the VR glove’s fingertips, and suddenly the user’s hand is tricked into thinking it’s touching, or holding, something.

The authors tested their VR glove, which weighs in at about a third of a pound (just a bit more than a baseball), on a virtual knight from a computerized chess board — though the authors actually called it a “chess horse.” The efforts were a success; as the user’s real hands closed over the digital object, the glove’s actuators mimicked its physical dimensions by expanding appropriately into the real fingertips. The user not only felt the knight’s shape, but could also pick it up and hold it, proving that the actuators could stay convincingly “on” over periods of time.

While this is a pretty cool step, we’re not quite at Ready Player One levels yet. The prototype glove only fits three of the hand’s fingers, and each only gets one actuator (which makes sense, since they’re over half an inch in diameter). Feeling the finer details of a sculpture is currently out of the question. But increasing the glove’s sensitivity should prove incremental at this point, building on the technology developed here.

As the authors demurely put it, “We expect that our developed glove will be used in several ways by linking with various VR software.” Whether it helps make learning software more immersive, virtual scientific experiments more informative or even just video games more realistic, this kind of VR glove could be the preferred way to fool our minds in the future.