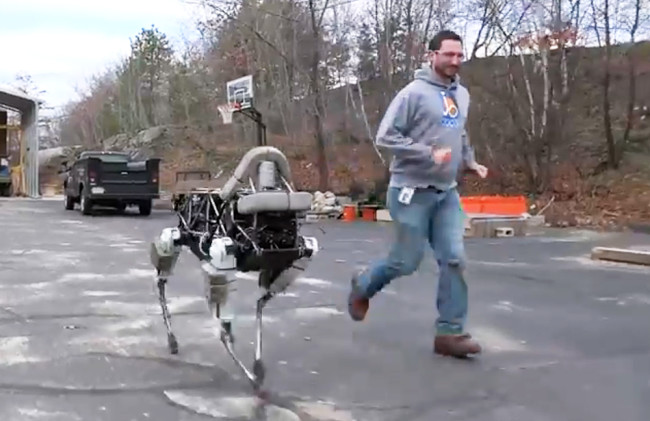 Boston Dynamics, the company that builds incredibly agile robots, has added another four-legged sprinter to its pack. In order to introduce the world to “Spot,” the crew at Boston Dynamic kicked the innocent robot as it walked through the halls of their building — and filmed it. However, as you can see in the YouTube video, Spot never falters under the abuse; it dynamically corrects its balance even after a good shove. And that’s the coolest part. Spot is a walking robot that’s autonomously nimble on its feet. See Spot Run When you’re an advanced robotics builder owned by Google, you don’t have to do much to make a splash. Boston Dynamic’s video (clearly filmed before Snowmageddon) is simply called “Introducing Spot,” and it’s two minutes of the quadruped climbing stairs, walking up hills, and, of course, getting kicked. A four-sentence video description is the only additional information the company is providing about Spot:

Spot is a four-legged robot designed for indoor and outdoor operation. It is electrically powered and hydraulically actuated. Spot has a sensor head that helps it navigate and negotiate rough terrain. Spot weighs about 160 lbs.

We have no idea why Spot was built, or what the company’s plans are. Nevertheless, the video has garnered almost 3 million views in two days, which has fueled a lot of Spot speculation. For example, at the 1:20 mark, Spot (Spot One) repeatedly bumps into another Spot (Spot Two) before they both climb a hill. After a few nudges, Spot One readjusts its heading and both Spots start walking in parallel up the hill. http://youtu.be/M8YjvHYbZ9w That simple course correction seems to be evidence of rudimentary decision-making abilities. Iain Couzin, a Princeton biologist, believes the Spots are exhibiting the same herd-like behaviors seen in animals. In an email to Wired, Couzin wrote:

"The collision does result in them tending to align with one another (since each pushes against the other),” Couzin wrote in an email. “That can be an important factor: Simple collisions among individuals can result in collective motion.”

What Does Spot Do? Spot is about the size of a St. Bernard, and it moves in a similar manner. But why did Boston Dynamics build this robot? No one is really sure. Spot is similar to a larger four-legged robot called LS3, which is designed to carry soldiers’ carry heavy loads through rough terrain in a war zone. Now that Google owns Boston Dynamics, one writer atIEEE Spectrum guessed engineers’ rationale for building Spot was “because we can, and it’s cool.” Whatever Spot’s destiny is, we hope it receives fewer kicks on its way to the top. Boston Dynamics, for their part, did state in the video that no robots were harmed in the making of their video.