This Evaporation-Powered Engine Can Drive a Tiny Car

Artificial muscles may move the machines of the future, and the only power they need is evaporating water. Researchers at Columbia University have built artificial muscles that expand and contract with changing humidity, and in the lab, they’re already powering LEDs and propelling miniature cars.

The Power of Evaporation

“Engineered systems rarely, if ever, use evaporation as a source of energy, despite myriad examples of such adaptations in the biological world,” wrote lead author Xi Chen and his colleagues in a paper published in the journal Nature Communications. Of course, there’s a reason for that: evaporation creates pressure changes at a very small scale, but the force it produces doesn’t generally scale up very well. But Chen and his colleagues found a way to bend the rules. They attached a layer of bacterial spores to a thin plastic tape. Spores of the bacterium Bacillus subtilis expand when they’re exposed to humidity, and they contract when they’re dry. That’s because the spores store water in very small, nanometer-scale spaces, so evaporation causes major pressure changes within those tiny spaces.

When thousands of the spores are layered onto a strip of tape, they all expand and contract together, and their combined force is enough to alternately straighten and curl the surface of the tape. Chen and his colleagues call them Hygroscopy Driven Artificial Muscles, or HYDRAs.

That tiny breakthrough drove a number of innovations in the lab. They created a “muscle” by putting strips of spores on alternating sides of a longer strip of tape, so that when the spores contract, they make the tape scrunch up instead of curling. Several of these strips together can contract with enough force to lift small weights of 0.2 lbs to 0.7 lbs – fifty times the weight of the strips themselves. They also created a generator by stretching HYRDA strips horizontally over a small container of water covered with shutters. As humidity builds up, the HYDRAs expand and push a beam to open the shutters. Water vapor can now escape through the open shutters, so humidity decreases and the HYDRAs contract, pulling the beam to close the shutters and starting the cycle over. The engine produced an average power of 1.8 microwatts – enough to power a pair of LED lights. 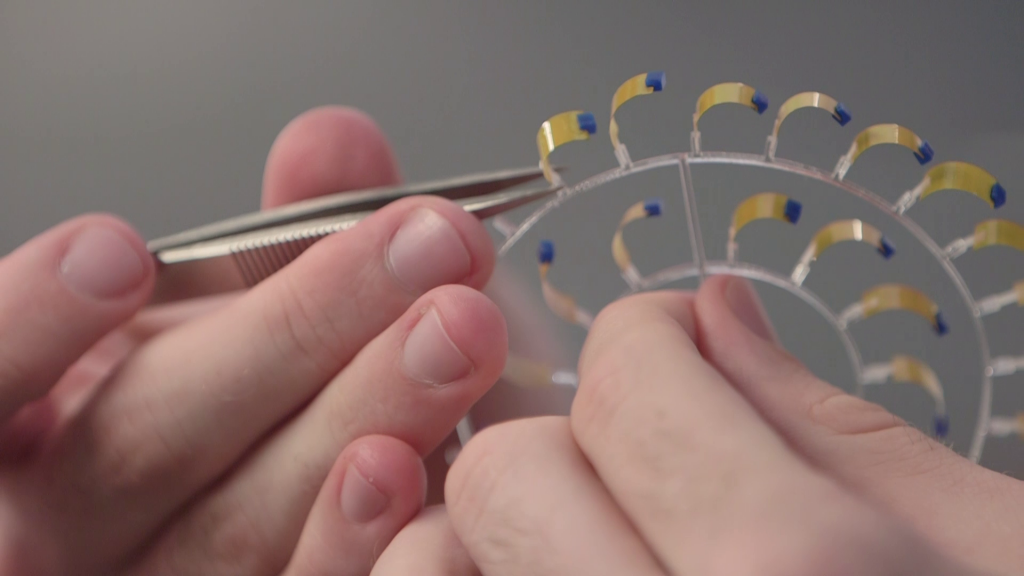 Finally, the researchers had a bit of fun. They attached short HYDRA strips around two concentric rings, a bit like cars on a Ferris wheel, and then they put four or five of these wheels on an axis. Then they placed the whole contraption halfway inside an enclosure with paper walls. When the paper was wet, half of the wheel would be exposed to humid air, so the HYDRAs would expand; the other half would be dry, so the HYDRAs would contract. The idea was that as the HYDRAs furthest from the paper walls dried out and contracted, their movement would shift the whole wheel’s center of mass, creating torque and causing the wheel to rotate. To increase the shifted mass, the researchers attached small acrylic blocks to the ends of the HYDRAs. It worked, and the higher the humidity inside the enclosure, the faster the wheel turned. But an evaporation-powered miniature Ferris wheel wasn’t enough for Chen and his team. They mounted the engine on a frame with two pairs of wheels, using a rubber belt to connect the rotating engine to the front wheels. As water evaporated from the paper, the engine turned and drove the little quarter-pound car forward.

The engineers say HYDRAs could have many other applications, including artificial muscles for robots. And because sources of evaporation are easy to find in nature, and the materials required to build HYDRAs are relatively inexpensive, they suggest that HYDRA engines could be used to provide power in remote locations. That’s still some time in the future, obviously. But muscles made of spores may be up to the challenge – just add a little water.