A Swedish company launches one of the first models of an all-electric powerboat. 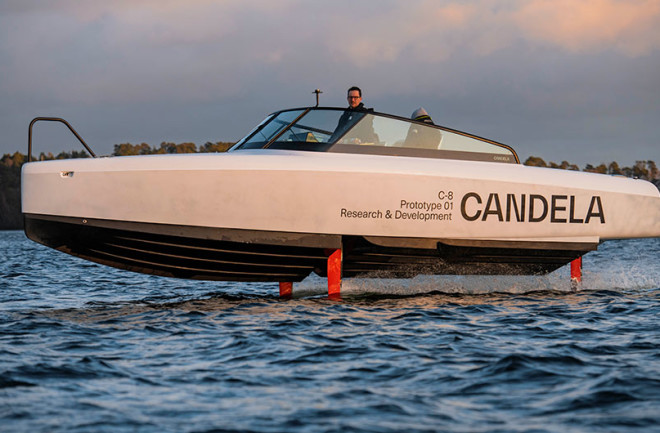 (Inside Science) -- The boat appeared normal in the video until it didn't. A sleek white powerboat, about 30 feet long, skimmed along the top of the water like one would expect until the boat's hull began to rise bodily out of the water, revealing three stilt-like legs.

This was an early run of one of the newest all-electric powerboats, the Swedish company Candela's new C-8. The pleasure boating industry, like the car industry, is starting to invest in electrification and weaning itself off fossil fuels. And by designing their boats to use hydrofoils -- essentially underwater wings -- that lift most of the boat out of the water, Candela hopes they can become the flagship of this nascent movement.

Under the hood, swapping out a power boat's gas-guzzling motor for an electric one isn't that different from making the swap in a car. But once it gets going, boating has a major disadvantage: water is heavy. It drags on a boat's hull as it moves, forcing the engine to work harder for every tick of speed compared to a car. Even powerboats that rise partially out of the water as they move, due to a design feature known as a planing hull, are held back.

"Getting long range and high speed with a conventional electric boat with a planing hull is impossible," said Candela company representative Mikael Mahlberg.

Enter those stilt-like legs and the hydrofoils beneath them. Shaped like an airplane's wing, hydrofoils work in a similar manner to their aerial cousins. As the boat picks up speed, the water rushing over the top and bottom of the hydrofoil exert different amounts of pressure (in part thanks to a rule in physics called Bernoulli's Principle). This pushes upwards on the foil, and, with the right speed and angle, the force can become strong enough to actually lift the body of the craft out of the water.

Hoisted above the water, the boat is then free from much of its drag -- 80%, according to Candela -- greatly increasing the efficiency of the engine. The boats are boasting a range of 50 nautical miles (about 57 miles) at 24 knots (about 27 miles per hour) on one battery charge.

The hydrofoils also makes the ride smoother and quieter than a planing hull, said Mahlberg. "If you have side winds, or if you have waves or whatever, you won't feel them as a passenger. You'll just fly through it."

Meanwhile, the C-8 being electric also cuts down on emissions compared to fossil-fuel powered peers. The boat will still need to be charged, so emissions may still happen somewhere depending on the source of that electricity, but the boat would produce no emissions itself.

Fossil fuel-powered boats can also emit pollution by oil and fuel spills, which the electric motor would avoid.

Candela isn't the only company trying their hand at electrifying the small boat market,  and it's worth noting that hydrofoils are not fundamentally new -- they've been in use in some form for more than a hundred years. But Candela is hoping that by combining different tech, as well as features such as a premium sound system, it can make an appealing product. Mahlberg specifically cited the Tesla electric car company's strategy as inspiration.

Timothy McCoy, a professor of marine engineering at the University of Michigan, did not seem surprised at the push for electrification. "I think it's kind of following in the same direction as the automotive industry. Where fuel is more expensive, where people are more concerned about green technologies, they'll see more electrification going on."

As for how this powerboat fits in to the world of boats and ships, it's important to remember that there's a huge diversity of craft, from power boats to ferries and massive supertankers. This means it can be hard to generalize the progress and challenges around electrification, said McCoy.

"As you go from a personally-owned pleasure craft to a commercial vessel, the level of engineering involved steps up by an order of magnitude," said McCoy.

That said, we are seeing some ferries go from diesel to hybrid, such as in Washington State, and even fully electric, such as in Norway. In the meantime, the shipping industry is looking at other tech to reduce greenhouse gas emissions, like hydrogen fuels or carbon capture.

Candela and other companies like it are hoping the pleasure craft industry is ready to embrace the electric powerboat. Candela says the company is now taking pre-orders. The boat costs roughly $320,000, excluding tax.