This Camera Is Powered by Light 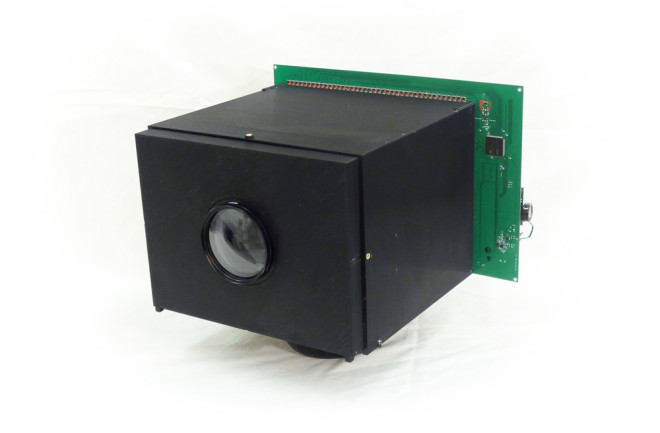 This camera is its own power source. | Computer Vision Laboratory/Columbia Engineering

Light is energy. Cameras need energy to work. A modern camera works by sensing light. This cycle has provided an elegant solution to one of our digital age’s universal problems: how to power a camera infinitely.

Digital cameras create images based on data from millions of photodiodes, each of which measures the amount of light it receives. But solar panels use photodiodes, too, converting light energy into electrical energy.

The camera transmits an image of a still life to a monitor. For a scene that is about 300 lux in brightness, it can produce an image per second, indefinitely. | Computer Vision Laboratory/Columbia Engineering

In April, a Columbia University team unveiled the first working prototype of an “eternal camera,” which records video and provides its own power, even in indoor settings. The team developed a design that continually toggles between measuring and harvesting light.

The possibilities could be as limitless as the camera’s power supply, from wildlife monitoring to law enforcement.

“We’re really in the middle of an imaging revolution, but if you want to see images becoming ubiquitous — I’m not talking about pretty pictures, but as a way to document life — you don’t want these devices tethered [to a separate power source],” says computer science professor and project leader Shree Nayar.

Nayar’s team will spend the next year or so shrinking the “big, clunky device,” boosting its power and enabling it to communicate wirelessly.

[This article originally appeared in print as "Behold the Eternal Camera."]