This AI Can Beat a Top Fighter Pilot 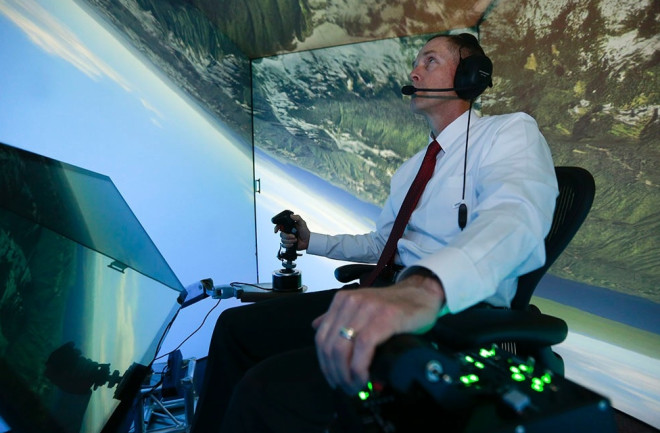 Retired Air Force Colonel Gene Lee flies against ALPHA in a simulator. (Credit: Lisa Ventre/UC Magazine) Move over Maverick, there's a new Top Gun in town. A new program developed by researchers at the University of Cincinnati could give real-life fighter pilots a run for their money. Called ALPHA, the artificial intelligence has proven itself by repeatedly besting an experienced fighter pilot in a dogfight simulator without once being shot down. And, instead of a requiring a room-sized supercomputer, the program ran on a laptop.

The system is based on a type of programming called "Genetic Fuzzy Tree" logic. The AI takes a more human approach to decision-making, breaking down big decisions involving hundreds of factors into smaller pieces that can be analyzed separately. This greatly reduces the number of inputs the computer must sort though for any given choice, allowing it to think much faster. These sub-decisions are then combined into a cohesive strategy, a process that the researchers say takes less than a millisecond — orders of magnitude faster than a human pilot can think. Using a tiered system for decision-making also reduces the computing power the AI needs to operate. While they trained their system on an ordinary computer, they say that it could theoretically run on a Raspberry Pi, a $35 computer the size of a credit card. “I was surprised at how aware and reactive it was. It seemed to be aware of my intentions and react[ed] instantly to my changes in flight and my missile deployment," said Gene Lee, a retired Air Force Colonel and former fighter pilot instructor who has flown against AIs since the 1980s, in an interview with UC Magazine. Lee was unable to score a single victory against ALPHA even when the program was placed at a significant disadvantage in terms of speed and sensor and weapons capability. The results of the dogfight simulations were published in the Journal of Defense Management.

The Best of the Best

ALPHA's creators used a form of Darwinian evolution to arrive at their current product. They matched multiple versions of their program against each other in a tournament and let them fight it out to single out the most fit version. In addition, they say that they will continue to update ALPHA as they progress, teaching it new tactics and increasing its ability to "think". Completely autonomous fighter drones are likely a ways off, but the researchers say that their program could serve as an artificially intelligent "wingman" for human fighter pilots, analyzing situations and suggesting optimal tactics for them. Their goal is for the AI to operate multiple aircraft at once, maneuvering them in tandem to operate as a centrally-controlled fighting force. It's probably safe to assume that ALPHA will never suggest "buzzing the tower" as an optimal maneuver.