Think Tech: Taking Pictures at Another Time and Place

A new Olympus camera lets you take pictures like a photojournalist or a 19th-century photo pioneer. 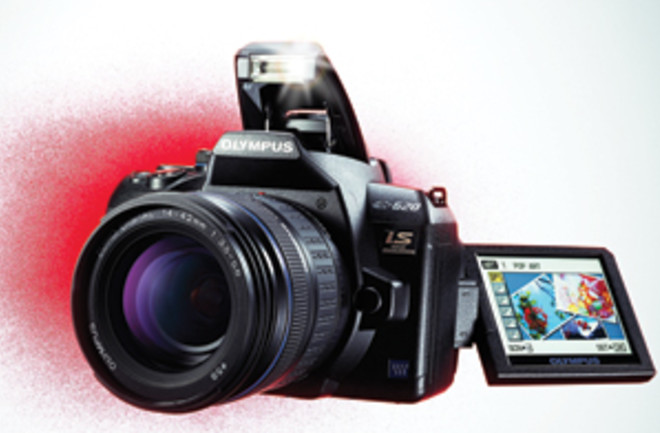 Put more variety into your photography with the $700 Olympus E-620. This 12-megapixel digital SLR camera comes with a suite of built-in art filters that allow it to take pictures with the perspective-altering look captured by a pinhole camera, the retro feel of grainy black-and-white film, the saturated hues of pop art, and more. The camera’s autofocus ability is enhanced with face-detection software, and unwanted motion blur is reduced with an image-stabilization feature. The E-620 is designed to be used with standard interchangeable camera lenses; if you do not own any, for an additional $100 the E-620 comes equipped with a 14–42mm zoom lens.

Photograph the invisible world with the $300 Celestron 44340 digital microscope, which can magnify objects up to 400 times. An LCD screen lets you view images in real time, and the built-in two-megapixel camera lets you save your discoveries to a memory card.

If the heavens above are more your style, the Meade ETX-LS telescope features a digital camera with a resolution of 640 x 480 pixels. The ETX-LS sells for $1,300 and comes with a tripod and a computer-controlled mount that make finding celestial objects a snap.

For active souls, such as cyclists or climbers, Oregon Scientific’s $250 waterproof and shock-resistant ATC5K camcorder is just the thing. The camera is small and light enough to attach to a helmet or strap to a limb. The ATC5K captures video at a resolution of 640 x 480 pixels at 30 frames per second and can also take still images.