In 1945, Percy Spencer, an engineer at the Raytheon Company in Massachusetts, was inspecting a factory that manufactured microwave generators for radar. During his morning tour, he noticed a candy bar in his pocket had melted while he stood close to a running unit. Realizing he had stumbled upon a new way to heat food, Spencer built the first microwave oven. Soon microwaved meals debuted in Raytheon's executive dining room. In 1947, the company began selling a fridge-size $3,000 oven to defrost and heat meals on trains and ocean liners. Microwaves hit the kitchen in 1967, when Raytheon and Amana developed a $495 countertop unit. Engineers are still working on ways to disperse microwaves more effectively to minimize uneven heating. 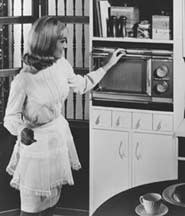