The World's Smallest Motor Could Propel a Medical "Microbot" Through Arteries 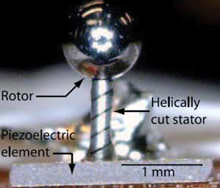 Within a few decades, a surgeon may be able to make a tiny incision in a patient's artery and insert a miniature robot that would scoot along through the blood vessel to the area of concern. The microbot could remove blockages, scrape plaque off of artery walls, remove a few cells from an organ to test for cancer, or could even, eventually, carry a tiny camera to show doctors exactly what's going on inside the body. In a major step towards that science fiction-tinged surgical scenario, researchers have built and demonstrated a motor about twice the width of a human hair that could power such a microbot. Researcher James Friend says that miniature mechanics have been a long time coming.

"If you pick up an electronics catalogue, you'll find all sorts of sensors, LEDs, memory chips etc that represent the latest in technology and miniaturisation," he says. "Take a look however at the motors, and there are few changes from the motors available in the 1950s" [BBC News].

Doctors already snake catheters through blood vessels in many procedures to reduce the impact of surgery, but some blood vessels, like the labyrinthine network in the brain, are too narrow and delicate to reach with current technology. But a microbot might be able to reach even these most sensitive areas, and could one day be used to remove clots from stroke patients' brains in the emergency room. The researchers have tested their motor

in human blood and artificial arteries and later this year it will begin experiments in pigs, whose arteries and brains are similar to humans, before proceeding to full-scale human trials [Telegraph].

The new motor, which is described in the

Journal of Micromechanics and Microengineering

is powered by a piezoelectric material, which vibrates in response to an applied electric field. A spiral rod absorbs those vibrations and translates them into rotational forces that spin a tiny stainless-steel ball. That motion could be put to work to rotate a whip-like tail over a thousand times a second, say the team, in a similar style to the beating flagellum of a sperm cell [New Scientist].

If the idea of a microbot speeding through blood vessels on an urgent mission sounds familiar, you must be a movie buff: The

idea was first floated in 1966's Fantastic Voyage, starring Raquel Welch, in which a similar machine was placed inside a diplomat to perform life-saving surgery. The researchers ... have paid homage to that film by naming their device, Proteus, after the capsule in the film [Telegraph]

. In 1987, Inner Space sent a similar micro-craft on another lifesaving mission.