Weary of spending their days chained to a PC, Claudio Pinhanez and a group of fellow computer scientists at IBM's T. J. Watson Research Center in Yorktown Heights, New York, devised a way to turn any surface into a touch-sensitive display. The system, called Everywhere Display, uses a ceiling-mounted projector and a rotating mirror to reflect an image anywhere in a room. A person points to or moves something on the display; a camera relays that information to a computer, which executes the command. In a whimsical demonstration, Pinhanez used the Everywhere Display to direct participants in the steps of assembling M&Ms into an image. For more serious purposes, a similar setup could train a worker to repair equipment or allow an interactive remote control to appear wherever it is needed. "The display could be on the sheet of a hospital bed, so a patient could get information or control the TV without moving," Pinhanez explains. "This could transform computer access into a service you expect, like power or phones, without requiring people to carry stuff around," he says. 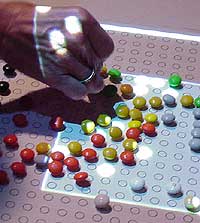