This is why people think robotics are the future 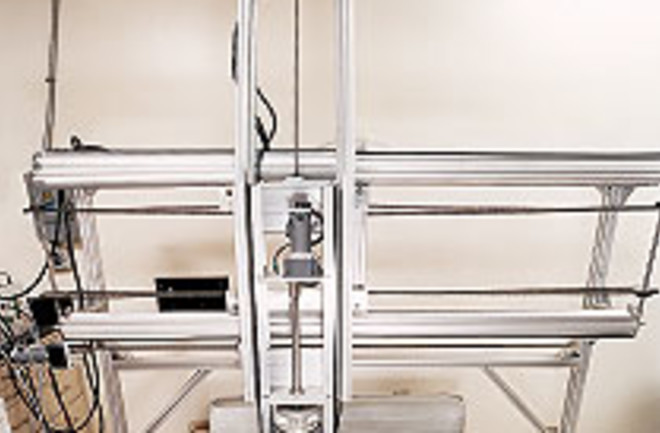 The prototype machine, which cost $30,000 to build, is now at NASA’s Marshall Space Flight Center, where engineers will determine if the technology can be used to erect moon buildings out of lunar dust. | Sian Kennedy

In a sunny laboratory at the University of Southern California, a robotically controlled nozzle squeezes a ribbon of concrete onto a wooden plank. Every two minutes and 14 seconds, the nozzle completes a circuit, topping the previous ribbon with a fresh one. Thus a five-foot-long wall rises—a wall built without human intervention.

The wall is humble but portentous. “If you can build a wall, you can build a house,” says Behrokh Khoshnevis, an engineering professor, as he watches the gray mixture squirt out in neat courses from what he calls a contour crafter, a machine about eight feet tall and six feet wide. If all goes as planned, Khoshnevis will use a larger, more advanced version of the device later this year to erect the first robotically constructed house in just one day.

Khoshnevis believes his contour crafter will revolutionize building construction, dragging it into the digital age. Today, despite the advent of tech tools like power saws, mechanized cranes, and pneumatic nailers, construction is essentially the same tiring, gritty job it has been for 20,000 years. Workers still have to cut, grasp, hoist, place, and fasten materials, which is why labor accounts for about half of a building’s cost. The process is dangerous, slow, and wasteful: More than 400,000 American construction workers are injured each year, and a typical American house takes at least six months to complete, generating about four tons of waste.

Khoshnevis, 54, a prolific inventor who emigrated from Iran in 1974 and holds patents in fields ranging from optics to robotics, decided there had to be a better way while troweling plaster cracks in his living room following the 1994 Northridge, California, earthquake. “It occurred to me that a trowel, a very simple tool that has been used for ages, can actually create nice, smooth surfaces. In manufacturing, that is always what you are after. Yet not a single automated manufacturing process used trowels,” he says.

To prove automated troweling could work, he invented a small-scale machine for making objects no more than 20 inches across. Guided by input from a computer-assisted-design program, the little contour crafter has a nozzle that navigates on three axes and squeezes out ceramic clay like toothpaste from a tube. A pair of trowel-like fins smooth the top and side surfaces as the layers stack up, yielding cubes, boxes, bowls, domes, cones, or other shapes specified by the software. The device is similar to rapid prototype machines, which have been used for about 15 years to print out three-dimensional plastic models, but the trowels “allowed a new degree of control on the exterior surfaces,” says Khoshnevis.

It worked well on this small scale, so the engineer said to himself, “Why not use concrete and make a whole house?”

Funded by a National Science Foundation grant and aided by engineering graduate student Dooil Hwang, Khoshnevis designed and built a wall-making machine. “I gave myself three years to build it, but it took only 18 months,” says Hwang. The plucky machine uses two parts standard concrete mix (“You can get it right off the shelf from Home Depot,” says Khoshnevis), two parts sand, and one part water, squeezed out of a steel cylinder by a screw-driven plunger. The mix sets up quickly and easily supports its own weight as succeeding layers are extruded.

A wall alone does not make a house. A contour crafter would also need to insert plumbing pipes, electrical wiring, and ventilation ducts in walls as it builds them. The prototype can’t do that, but Khoshnevis sees that as a trivial problem: “The second hand on your watch was placed robotically on a tiny shaft. Modern robotics can achieve tight tolerances and very high speeds. So having segments of tubing robotically inserted, put atop one another, and welded together as the wall goes up is really a no-brainer.”

“I have other patents, but I always wanted to do something really significant for humanity. It seems this is the one,” says inventor Behrokh Khoshnevis, with his contour crafter. | Sian Kennedy

Ultimately, it would work like this: On a cleared and leveled site, workers would lay down two rails a few feet farther apart than the eventual building’s width, and a computer-controlled contour crafter would take over from there. A gantry-type crane with a hanging nozzle and a components-placing arm would travel along the rails. The nozzle would spit out concrete in layers to create hollow walls and then fill in the walls with additional concrete, most likely an insulating variety that incorporates polystyrene beads. The placement arm would insert wiring, reinforcing rods, and plumbing and ventilation shafts in hollow chases left in the walls, welding and screwing sections together as the building rises. The arm would then place beams on top of the completed walls to form floors and the roof. Humans would hang doors and insert windows.

“You could set it up on a site to build one house or a whole row of houses,” says Khoshnevis. He has even designed a contour crafter that climbs, allowing the construction of skyscrapers.

As smart as the idea of contour crafting seems to be, houses require more than good engineering. They will not be popular if they resemble concrete bunkers more than elegant, graceful homes. Khoshnevis points out that the exterior trowel could be followed by a rolling die that prints a brick, shingle, or clapboard pattern in the wet concrete, while the interior could be painted using ink-jet technology in any color, or even in wallpaper patterns. The concrete itself could be of varying types, including versions that resemble adobe or plaster.

With more complex nozzle architectures, the machine could make buildings that are not just cheaper and quicker to build but far safer too. Today, for example, making a house earthquakeproof is material intensive, expensive, and inexact. But a contour-crafted building “can be strengthened in a smart way,” says Khoshnevis. “The reinforcement steel and even the chemical composition and thickness of the walls could be changed on the fly, with more added precisely where it is needed.”

Some building professionals are enthusiastic. Greg Lynn, a Los Angeles architect who specializes in buildings with curvilinear, organic shapes, was pleased to discover that “this machine doesn’t care if it is doing curves or lines. Living in a rectangle becomes an option, not mandatory.” If a whole-house machine existed today, Lynn says, “I’d be using it right now.”

“It’s exciting,” says Dennis Shelden, chief technology officer of Gehry Technologies, a Los Angeles building technology research and development company. “This represents the next step forward.” But he cautions that there may be structural issues. “We need to take a close look at how good the bond is between the layers.”

Khoshnevis believes that the varied shapes created by a miniature version of the contour crafter herald a revolution in architecture. “You will see houses, neighbor-hoods, and cities that look very different,” he says. | Sian Kennedy

Khoshnevis is confident that won’t be a problem: “The extruded layers can serve as form walls for a filling layer of structural material.” Because that filling layer would be a monolithic slab of concrete, “it will be plenty strong,” he says.

Even NASA seems to be interested. Khoshnevis recently shipped a prototype wall builder to engineers at the Marshall Space Flight Center. They want to find out if contour-crafting technology could erect buildings on the moon from lunar dust.

Here on Earth, what about all those construction workers who would suddenly be out of a job?

“This concern is nothing new,” says Khoshnevis. “When the automobile came along, people said, ‘What will happen to all of those horse-carriage drivers?’ But technology that makes sense typically brings dramatic social changes for the good. This is no different.”

Khoshnevis is inspired by the technology’s potential to build dignified low-income housing. “A billion people today do not have adequate shelter,” he says. Using soil dug from the building site and stabilized with cement, the contour crafter could erect inexpensive dwellings customized to a family’s needs.

“This technology is like a rock that we have rolled to the top of a cliff,” Khoshnevis says. “Just one little push, and the idea will roll along on its own.”