The Volocopter Wants to Be Your Personal Flying Machine 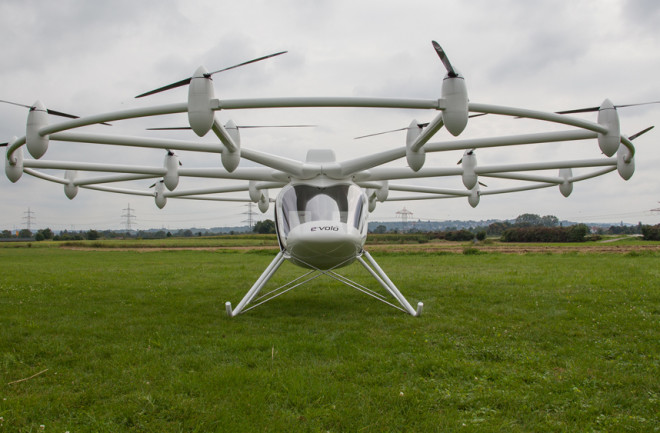 The Volocoptor prototype. (Credit: e-Volo) If a quadcopter drone and helicopter somehow reproduced, the offspring would be a Volocopter. The Volocopter is a novel mode of transportation built by the German company e-Volo. The prototype aircraft, currently in testing, runs purely on electricity and features a two-seat cabin, 18 rotors, and a simple joystick control. It’s a flying machine that’s so unique that it cannot be classified into any known category, and the team at e-Volo hopes the Volocopter will someday satisfy a market that flying cars, to this point, have failed to.

The team at e-Volo flew the Volocopter via remote for the first time in 2013, but they are hard at work preparing the craft’s computer system’s for its first manned test flight, which they hope to conduct in a few months. If all goes well, the Volocopter could make its big debut at the EAA AirVenture in Oshkosh, Wisc., Wired reports. The design was so unique that German officials created a new class of aircraft so e-Volo could get a license to fly it.

Engineers hope the Volocopter will bring the gift of flight to the masses, which has always been the vision of flying car manufacturers. But in order for a flight system to broadly appeal to consumers that want to fly to and from the grocery store, it has to be simple and safe. And unlike most flying car prototypes, the Volocopter has both of these things going for it. Its construction and mechanics are incredibly simple, and the design is also redundant: Even if some of the rotors fail, the Volocopter can still be operated safely. The Volocopter takes off vertically just like a helicopter, but unlike other aircraft, it runs on battery packs. Currently, the copter can only fly for 20 to 30 minutes on a charge, but engineers are working to develop a hybrid model that could extend flight-times to over an hour. They also want to design a larger version that could carry four to six people. As it stands, the e-Volo team plans to sell the two-seated model for $340,000 apiece. Talk about taking FPV flying to an entirely new level.