The Velociraptor-Like Robot That Could Save Your Life

A balancing trick used by geckos, and possibly dinosaurs, is helping to make more agile and helpful rescue robots. 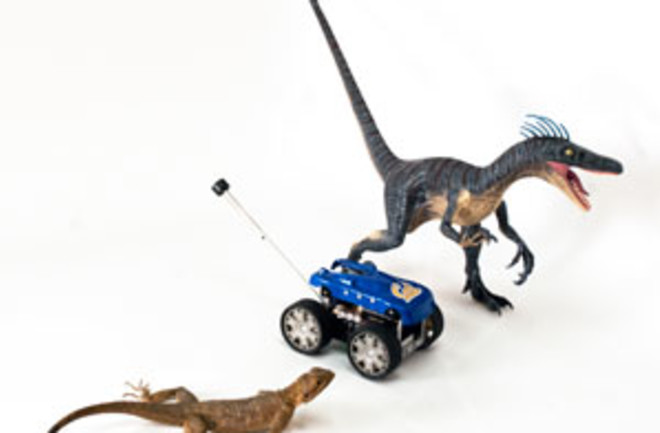 On your mark, get set, go! Tailbot may not have the speed of an agama lizard (left) or an extinct velociraptor (right), but it is just as adept at maneuvering its tail in midair to set up a perfect landing. | Dr Torsten Wittmann/Science Photo Library

Biologist Robert Full’s lab is brimming with critters in motion: scuttling crabs, crawling centipedes, prowling geckos. These animals serve as inspiration as he and his colleagues at the University of California, Berkeley, build robots that are fast, steady, and agile. In January, Full used his analysis of leaping lizards to design a rugged bot that can navigate through the rubble following an earthquake or other disaster.

Full’s breakthrough came from observing African agama lizards, which have a remarkable ability to stick a perfect landing after vaulting through the air. The lizards keep their balance during flight, Full found, by moving their tails up and down to counteract the motion of their bodies and keep themselves stable. He thought about how he could apply that technique to search-and-rescue robots, which must remain upright as they clamber across precarious terrain.

Within a few months, Full and his team had built a four-wheeled, foot-long vehicle with a stiff tail section, which they dubbed Tailbot. When it was driven off a ramp without any postlaunch adjustments, Tailbot nosedived into the ground. But when the robot lifted its tail after it left the ramp—just enough to make up for the vehicle’s forward pitch—it landed even more gracefully than the lizards. Full and his team are now working on a robot that can stabilize itself if it starts to bank left or right in the air.

Full’s lizard analysis also led him into unfamiliar territory: paleontology. He found 40-year-old scientific papers suggesting that the velociraptor—a swift predatory dinosaur—used a similar body-stabilizing trick. Full made a mathematical model of how the creature moved, based on its bone structure, and discovered that the raptors were probably as good as or better than present-day lizards at staying upright by using their tails. Although Full can never confirm his theory, he is able to assess the motion of the computer-generated raptors in the film Jurassic Park. “If you watch that scene where the velociraptor is jumping from the balcony,” he says, “it moves its tail perfectly.”