The Tweets Heard Round the World: Twitter Spreads Word of Iranian Protests 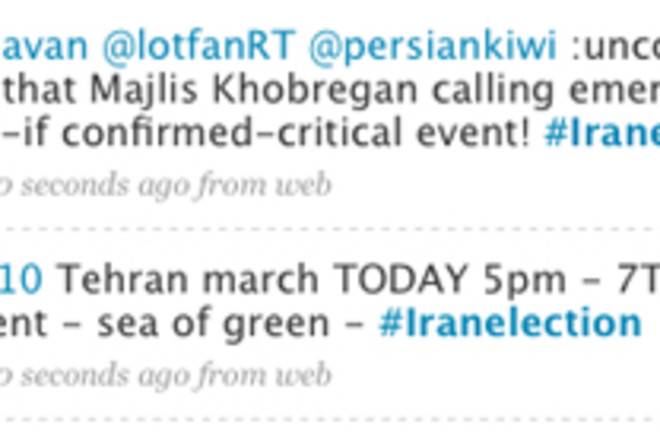 The street protests in Iran will be not be televised--how passé. Instead, they are being tweeted. The microblog service Twitter has become a critical way to get out information about the tumult in Iran's capital, Tehran, where people have poured into the street to protest the disputed results of last Friday's presidential election. And the whole world is watching. The U.S. State Department has confirmed that over the weekend officials

reached out to Twitter and asked them to delay a network upgrade that was scheduled for Monday night. The reason? To protect the interests of Iranians using the service [Time].

The vast majority of Twitter messages support the leading opposition candidate, Mir Hussein Moussavi, and argue that he was the true winner of the presidential election.

Twitter users are posting messages, known as tweets, with the term #IranElection, which allows users to search for all tweets on the subject. On Monday evening, Twitter was registering about 30 new posts a minute with that tag. One read, “We have no national press coverage in Iran, everyone should help spread Moussavi’s message. One Person = One Broadcaster. #IranElection” [The New York Times].

Since then, the Iranian government has restricted the movements of foreign journalists and has cracked down on blogs and Web sites within the country, but the flow of information on Twitter has only increased. Twitter does have its downsides. The service spreads information very efficiently, but it can be hard to distinguish false information and inflated rumors from true reports--especially since many people tweet anonymously. Those involved in the Tehran protests worry that the Iranian government is tweeting false information to confuse protesters.

It's also not clear who exactly is using Twitter within Iran, especially in English. Anecdotal evidence suggests that the bulk of tweets are coming from "hyphenated" Iranians not actually in the country, getting the word out to Western observers, rather than from the protesters themselves, who favor other, less public media. This is, after all, the country where the government once debated the death penalty for dissident bloggers [Time].

Internet and cell phone access have reportedly been sporadic in Tehran, and access to some Web sites has been blocked. But many

Twitter users have been sharing ways to evade government snooping, such as programming their Web browsers to contact a proxy — or an Internet server that relays their connection through another country [The New York Times].

Other foreign Twitter users have changed the location information in their profiles to make it appear that they're operating from inside Iran, and bloggers have also changed location and time stamp settings.

“Censors in Iran are currently searching for blogs with Tehran local settings as a way of finding and shutting down sites that are protesting Iran’s recent (probably stolen) election,” [wrote one Australian blogger]. “The more blogs in the world that are set to Tehran time, the harder the job is for these censors to do their job” [The Wall Street Journal, blog].