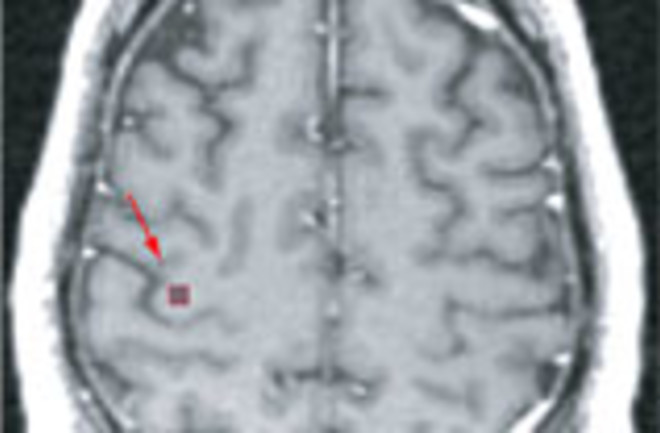 On an MRI image of the brain, the square shows the tiny area the device covers.

Sign up for our email newsletter for the latest science news
The BrainGate implant's array of 100 hair-thin electrodes delves the cortex and eavesdrops on neurons that normally control hand and arm movement.

Neuroscientist John Donoghue of Brown University has brought us a big step closer to the day when people can interact with computers directly through the power of thought. In July he and his team published a paper in Nature outlining remarkable progress in picking up brain signals with implanted electrodes and using those signals to control a range of devices.

The experiments were conducted on a 25-year-old Massachusetts man paralyzed from the neck down. In 2004, surgeons placed a tiny 100-electrode array in his primary motor cortex, the brain region that controls voluntary movement, to collect electrical impulses from nerve cells and send them to a series of signal processors. Donoghue and his colleagues then supervised as the computer translated the man's thoughts of moving his arm and hand into the actual movement of external devices. On the first day the system was up and running, he was able to master the technique. He could move a computer cursor, play a video game, open e-mails, draw a crude circle, operate a television remote control, and even move a prosthetic hand and arm — using nothing other than his will.

The same basic brain-computer interface system had been tested earlier in monkeys, and a group in Georgia implanted electrodes in people as far back as the 1990s. But no other group has used implanted electrodes to monitor so many human neurons at once or had such impressive results.

The system was removed from the original subject after 14 months. It is now being tested on three other patients, including one with ALS. Neurologist Leigh Hochberg, the lead author on the paper with Donoghue, hopes that the current trials are the first step toward giving severely disabled people an unprecedented degree of independence. "The participants in these trials are pioneers," he says.

John Donoghue was a runner-up for Discover's 2006 Scientist of the Year, and also won a Discover Award for Innovation in 2004.

Over the last 50 years, the Army Corps of Engineers built some 350 miles of levees to protect New Orleans from hurricanes, a complex defense system that failed spectacularly when Katrina struck. To figure out what went wrong, the Corps appointed a task force of 150 scientists and engineers. On June 1 the Interagency Performance Evaluation Task Force issued its 6,000-page nine-volume answer, describing engineering lapses, design failures, and decades of neglect that led to antiquated structures neither high nor strong enough to withstand a storm like Katrina.

In fact, the levees had been designed to withstand only a category 3 storm. Katrina's winds were a strong category 3 when it hit land, but because the storm had reached category 5 at sea, it brought with it the storm surge of a much stronger hurricane. Although studies done in the 1970s indicated the need for increased flood protection, the Corps had never redesigned the system. The report also took the Corps to task for failing to keep track of the effects of subsidence: In New Orleans, the ground sinks over time. Levees and floodwalls had sunk by as much as 2½ feet in some places since the system was built. Because of budget cuts, the Corps may have rejected fixes and skimped on materials. Instead of building all levees with clay, for instance, engineers settled too often for sandy, silty hydraulic fill that was merely capped with clay. When Katrina hit, these structures gave way to the surge and waves.

At a press conference in New Orleans, Lt. Gen. Carl Strock, chief of engineers and commander of the Corps during Katrina, took responsibility for the failure of the levees, which the report called "a system in name only." Robert Bea, an engineer at the University of California at Berkeley and coauthor of an independent study, applauds the Corps for facing up to its failures but says the task force did not go far enough. Focusing on the engineering failure does not address organizational problems that led to a broader culture of neglect. "The Corps knew the system was outdated and wrong, and yet nobody talked about it," says Bea.

Ed Link, a civil and environmental engineer who directed the task force for the Corps, believes the tragedy cannot be blamed on one agency alone. "I think we, as a nation, are just too risky," he says. "We didn't make a long-term investment in New Orleans, and we got caught. We got caught big time."

In April researchers at Rutgers University and the University of North Carolina announced a remarkably versatile technique for converting wastes, coal, or almost any source of carbon into synthetic diesel and gas. Devised by chemist Alan Goldman of Rutgers University and his team, the new method builds on Fischer-Tropsch chemistry, which was invented for making synthetic fuel in Germany more than 80 years ago. Called alkane metathesis, the technique combines two catalytic reactions to cut up relatively low-value hydrocarbon chains and recombine them into chains of useful lengths. For example, it can transform two 6-carbon chains into a 2-carbon chain (a good heating gas) and a 10-carbon chain (perfect as a diesel fuel). Improving the method's yield and efficiency could allow the United States to convert some of its abundant coal supplies into synthetic fuels, reducing the nation's dependence on imported oil.

In August researchers announced the creation of a microscopic device that can make an electrical connection to an individual neuron, an invention that might one day lead to synthetic substitutes for damaged nerve cells.

Charles Lieber, a chemist at Harvard University, and his colleagues devised a tool that can record, stimulate, and modulate signals at multiple points on a neuron, from individual dendrites to axons, essentially duplicating the way that brain cells communicate. The device is so small—just 20 nanometers across—that 50 can fit on a neuron. While other researchers have made electrical connections to the nervous systems of animals and humans, until now no one has been able to forge a link at the level of individual axons or dendrites. "These devices can be used not only to record signals but to apply voltages back to the nerve cell," Lieber says. "We could stimulate a neuron to fire and control the rate of propagation of the electrical impulse."

The invention has profound implications for research and treatment. Using multiple inputs, it could soon be possible to decipher how neurons pass signals back and forth and how learning, memory, and other processes occur. Implanted in the brain, Lieber's electrodes might one day serve as prostheses to help damaged nerves regain their function. "The goal," he says, "is the betterment of the human condition."

Nothing is faster than light. So for decades engineers have tried to accelerate the pace of conventional, electricity-based computer chips by melding them with laser-based signal processors (like those used to send Internet data blazing through fiber-optic cables). In September researchers from Intel Corp. and the University of California at Santa Barbara announced they had found a promising way to achieve that long-sought goal.

The corporate and university teams set out to develop a hybrid design that could handle both electricity and light. They bonded a thin layer of indium phosphide, a compound that acts as a medium for the laser, onto silicon sheets by exposing both materials to a blast of hot, electrically charged oxygen atoms; the indium phosphide was spiked with aluminum gallium indium arsenide to give it added speed. A microlayer of oxides then formed on the two surfaces, gluing them together. "We can make thousands of lasers with just one bond, as opposed to bonding each laser individually," says John Bowers of UC Santa Barbara, coinventor of the new device.

When energized by electrical current, the bonded layer produces light that travels through channels in the silicon to a "modulator" that flickers the light tens of billions of times per second. A couple dozen lasers switching at this speed could handle a trillion bits of information per second — more than 100 times as fast as current silicon chips. What wonders will such power bring? For one thing, Bowers and his team say, by the end of the decade their new chips could make it possible to download a feature-length movie in just a few seconds.

"Who killed the electric car?" a documentary film asked this year. One major culprit is basic chemistry; batteries are lousy at storing and releasing an electric charge. But the electric car may get a second lease on life because of recent advances in an alternative technology — a type of electricity sponge called an ultracapacitor.

Unlike batteries, which work through relatively slow chemical reactions, ultracapacitors store electricity on the surface of an electrode; thus they can be recharged almost instantly. The downside is that ultracapacitors hold only a fraction as much energy as a comparable-size battery. In February researchers led by MIT engineer Joel Schindall unveiled an ultracapacitor whose plates are covered with a dense carpet of straw-shaped carbon molecules, or carbon nanotubes. The nanotubes drastically increase the surface area of the ultracapacitor electrode, allowing it to hold 20 times as much energy. Devices based on this breakthrough could reach consumers in less than five years, Schindall estimates.

95. Machines Learn How to Feel

Engineers at the University of Nebraska reported in June that they had developed a way to give robots a sense of touch: electronic skin that is cheap, flexible, and twice as sensitive as a human fingertip. This sensitivity comes from a film made of alternating monolayers of gold and cadmium sulfide nanoparticles separated from each other by a very thin polymer film. Any pressure against the electronic skin increases conductivity through the film.

Artificial skin could help robots grab fine objects, like Mars rocks. Another use, says researcher Ravi Saraf, is a probe that could sense cancerous tissue inside a patient. To test the skin's medical applications, Saraf says, "we just went to the butcher shop and started buying livers and muscles." If the concept works, biopsies may one day be replaced by a tiny mechanical caress.