New technology could allow big bottles  back into your carry-on luggage. Oh, and it could  fight cancer, too. 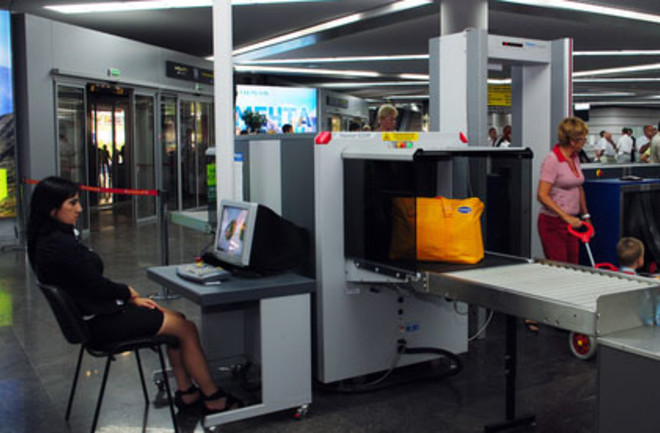 It has become one of the ritual frustrations of modern air travel: getting to the security check-in and having to throw out drinks, cologne, wine, snow globes—any large bottled liquid you might have inadvertently carried with you. In the United States, the Transportation Security Administration (TSA) does not allow through any containers holding more than 3.4 ounces due to the risk of liquid explosives. The rule is dumb and broad because standard X-ray scanners cannot distinguish one fluid from another. But a dose of intelligence is on the way. European authorities recently approved airport testing of Insight100, a device that identifies suspicious materials inside plastic and glass bottles as effectively as X-ray machines peer through a leather handbag.

Physicist Pavel Matousek got the idea for the scanner in 2004 while working as a researcher at the Rutherford Appleton Laboratory outside Oxford, England. He was developing a chemical-analysis apparatus based on a technique called Raman spectroscopy. The device flashes a laser pulse at a sample for just one-trillionth of a second. A specialized camera then captures the photons—the basic units of light—that bounce back. The returning light contains a lot of interesting information, Matousek explains, because photons lose energy when they strike the molecules in the sample, and in losing energy they also change color. “The pattern of colors and intensity distribution of those colors is unique to each molecule,” he says. “The pattern is like a fingerprint of the molecule.”

Most of the photons come straight back from the surface of the sample, but some of them tunnel into the interior instead. “They slowly drift deeper and deeper, and as they do that they also drift sideways,” Matousek says. Eventually they reemerge, but instead of heading straight back to the laser like the photons that bounced off the surface, they spread out over a much wider area. Matousek realized that if he could move the camera away from the laser, he would be able to capture those drifting photons and record the fingerprints of the molecules below the surface of the sample.

In 2006 Matousek helped found Cobalt Light Systems in Oxfordshire, England, to develop that technique, known as spatially offset Raman spectroscopy. The initial applications may be medical. Some researchers are currently testing Raman spectroscopy as a way to measure glucose levels in the bloodstream. The same technology could also enable surgeons to immediately analyze the healthy tissue at the margins of excised tumors so they could verify that all the cancerous cells have been removed, rather than having to send the samples off-site for analysis.

Compared with such medical applications, scanning bottles filled with liquids is simple. Cobalt adapted Raman spectroscopy for airport security by developing the Insight100, which is about the size of a microwave oven. When inspectors place a plastic bottle inside, a laser sends pulses into the container; a camera then captures those photons that managed to slip past the plastic, interact with the molecules in the liquid, and drift back out. Cobalt scientists have tailored their device to recognize the telltale patterns of scattered light associated with all the substances on the European Union’s threat list. When one of these materials, such as hydrogen peroxide or nitric acid, turns up, the Insight100’s screen flashes red. Water, shampoo, and that duty-free bottle of gin generate a green light.

The scanner’s accuracy has been confirmed repeatedly in the laboratory. Ongoing tests at major European airports are focused on documenting its efficiency; Matousek promises the Insight100 can perform its molecular pat-down in just five seconds. Now about that irritating shoe-removal routine...

Gregory Mone, a science writer based in Boston, is the author of the young-adult novel

Dangerous Waters: An Adventure on the Titanic.