The Self-Checkout Machine of Tomorrow Will Be Smarter Than You 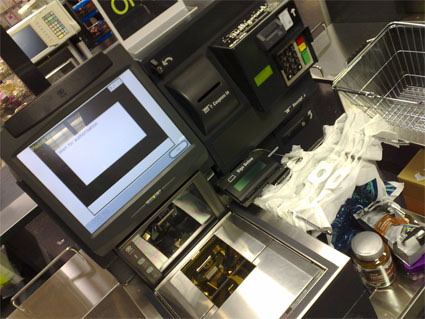 Can you tell the difference between Jonagold, Braeburn, and Cortland apples? Your grocery store's self-checkout machine can--or at least it'll be able to in the next few years as Toshiba perfects the software for the self-checkouts of the future. This futuristic machine uses a webcam to perceive the shape and color of fruits, vegetables, and other non-barcoded items, and then it uses an algorithm to pick the best candidate within its database. Shoppers have the ability to OK the machine's decision if it's right, or to correct it if it's wrong. And the scary thing? The machine learns from its mistakes. From New Scientist:

"This system gets smarter as you use it more," says Kubota. He says recent tests showed it was able to recognise produce even when it was placed in a clear plastic bag. Still, it is not perfect yet. Naoki Mukawa at Tokyo Denki University warns that users could take advantage of the re-educating mechanism to allow the wrong identification to go through because the mistaken product might be cheaper.

That's not the only hurdle. New Scientist found a skeptic in Keiji Yanai, a researcher at Tokyo's University of Electro-Communications:

He says this type of object recognition system is more difficult to perfect than facial recognition technology, as it is harder to distinguish between generic objects. Similar ideas designed to identify products without barcodes have never made it to market in the past, he adds.

And though it's a work in progress, there is nevertheless a time line: Toshiba has plans to introduce these smart self-checkout counters by 2014. Until then, you still have to scroll through oodles of images to find your match, or else visit that contraption of carbon and water otherwise known as a human being. Related Content: Discoblog: Helpful Robot Can Play With Your Socks Discoblog: Meet Dr. John, the Fancy Japanese Toilet That Gives Check-ups Discoblog: Online Shoppers Can Play Dress-Up With a Robotic Torso Discoblog: Worst Science Article Ever? Women "Evolved" to Love Shopping DISCOVER: Save Your Shopping Relationship