The Robots That Teach Each Other 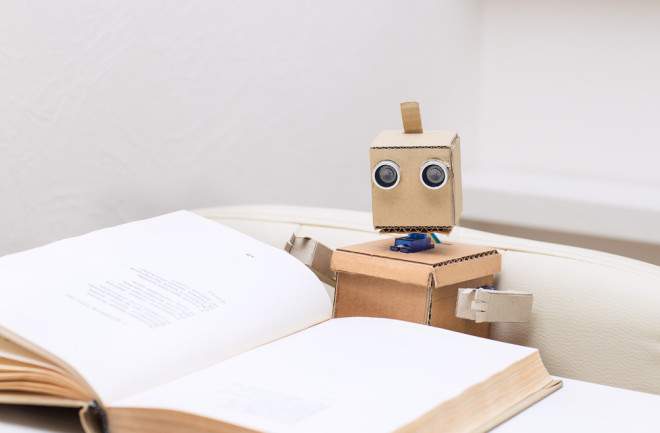 (Credit: Bas Nastassia/Shutterstock) Two robots traverse the desert floor. Explosions from a decades-old conflict have left a pockmarked and unstable territory, though many more improvised bombs lie concealed in its vast reaches. Sunlight splays off the beaten edges of Optimus, the smaller robot. Its motors whir as its claw grasps an unusual orb lying by its side. If Optimus were programmed to hope, it would hope the object was just a rock and not another bomb. It couldn’t afford to take many more hits, and its algorithms have grown wary of the risk. A hulking shape shimmers in the heat as it approaches Optimus, lolling like a huge, headless cowboy. Atlas, the second robot, inspects the orb and knows it holds a cocktail of volatile chemicals. The robot gently lifts the bomb from Optimus’ claw and shows it how to pluck out a barely visible blue wire. Now Optimus will know how to defuse this type of device in the future. As Optimus trundles off to resume its work, Atlas stands as content as a robot can be when saving its little partner from permanent decommission.

This imaginary scene shows the power of learning from others. Anthropologists and zoologists call this “social learning”: picking up new information by observing or interacting with others and the things others produce. Social learning is rife among humans and across the wider animal kingdom. As we discussed in our previous post, learning socially is fundamental to how humans become fully rounded people, in all our diversity, creativity, and splendor.

If we didn’t have social learning, we wouldn’t have culture. As zoologists Kevin Laland and Will Hoppitt argue

, “culture is built upon socially learned and socially transmitted information.” Socially acquired knowledge is distinct from what we learn individually and from information inherited through genes or through imitation.

Various species of whale have also developed all manner of cultural traditions that are specific to certain populations living in different places. Over a 27-year period, humpback whales adopted lobtail feeding, a new twist on their common hunting technique, allowing them to catch different species of fish. Killer whales also display distinct cultures, learning repertoires of songs and migration routes from one another, and singing in different dialects. Some groups have “greeting ceremonies,” where they line up in two opposing factions—like a cetacean West Side Story—before bounding about together in a blubbery mosh pit.

Individual chimpanzee communities are known to have unique behaviors shaped by social learning. (Credit: Kletr/Shutterstock)Many diverse species learn socially and some even have culture. Chimpanzees, for example, are known for their culturally informed tool use. While many chimps break off the stems of herbs and use the sticks to “fish” for termites, one group of chimpanzees living in the Republic of the Congo expanded on this method

. They fray the ends of the plant stems with their teeth to turn them into something resembling a paintbrush: a design choice that seems to help them catch more termites. Soon we might add robots to this list. While our fanciful desert scene of robots teaching each other how to defuse bombs lies in the distant future, robots are beginning to learn socially. If one day robots start to develop and share knowledge independently of humans, might that be the seed for robot culture?

Social learning among robots has recently been the focus of researchers at MIT’s Computer Science and Artificial Intelligence Laboratory (CSAIL). In 2017, they announced a significant breakthrough—robots that can learn from one another.

—that takes a two-pronged approach to learning. First, the robot is programmed with a knowledge base so it has information about how to interact with objects such as door handles. This knowledge base helps the robot navigate the constraints of the world, such as the physical necessity of having to turn a handle before pulling a door open. Once the robot “knows” how to physically interact with objects, it can begin to learn more complex tasks. For this to happen, a person uses the C-LEARN software to click and drag the limbs of a virtual representation of the robot to show its real-life counterpart how to tackle these tasks. Unlike previous methods of demonstrating tasks to robots, with C-LEARN a human “teacher” only needs to demonstrate the action once. Pérez-D’Arpino used this system to teach Optimus

, a little bomb-diffusing robot with two arms, how to perform a variety of tasks involving multiple steps. Then her team decided to see if they could get Optimus to pass its knowledge on to other robots.

Claudia Pérez-D’Arpino works with Optimus in her lab. (Credit: MIT CSAIL)Enter Atlas, a 6-foot bipedal humanoid robot that can walk around, balance on one leg while being pelted with projectiles, and even do backflips. Optimus and Atlas have very different kinds of bodies: Optimus is squat and trundles around on wheels, whereas Atlas is a colossal yet suave beast of a machine. The researchers used their C-LEARN system to transfer Optimus’ knowledge base and understanding of the steps required to complete tasks into a virtual representation of Atlas—much like how they initially taught Optimus by playing with a simulation of the robot. In this way, Atlas was able to integrate Optimus’ “knowledge” with its own knowledge base about the world’s constraints. For example, Atlas could complete tasks that were only demonstrated to Optimus, yet it had the ability to keep its balance at the same time—something the more compact Optimus didn’t have to worry about.

We’ve entered a world in which humans taught a robot that could teach other robots. But before you scramble for the bunkers, it’s important to point out that this form of social learning—the transfer of skills between robots—needs hefty intervention from a human.

For now, these robots must execute their tasks in an orderly fashion; they cannot deviate from the steps demonstrated to them. But Pérez-D’Arpino is working to make the robots more adaptable learners, with the goal of creating machines that are useful to humans, she says. “I think in the future this type of robotics will go out of factories and help in settings like hospitals and ultimately at homes,” she explains, “where it can assist people in doing tasks that they can’t do.” This system of demonstrating tasks to one robot that can then transfer its skills to other robots with different body shapes, strengths, and constraints might just be the first step toward independent social learning in robots. From there, we might be on the road to creating cultured robots.

[This post first appeared on Sapiens.org. You can read the original here.]