The rise of Chrome, the decline of Firefox? 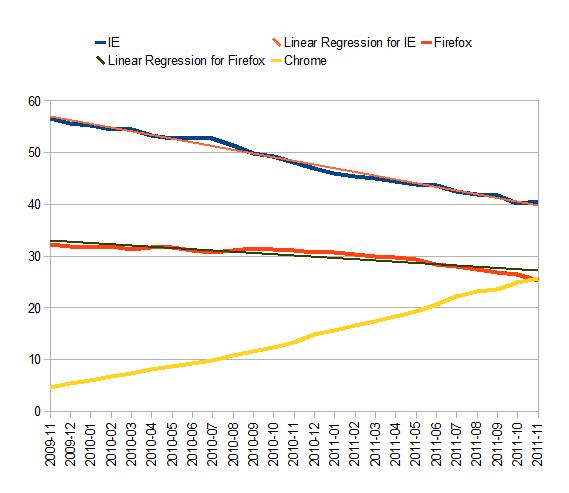 There's been extensive reporting in the media on the rise of Chrome, and the decline of Firefox, based on StatCounter data. I've got access to four weblog analytics, one of them going back to 2006. I see the same trend. It's real. What I don't understand is the lack of acknowledgment of the continued stagnation and decline of the Internet Explorer franchise. The magnitude of the downward slope of IE usage is about twice as large as that of Firefox. There is presumably a floor of IE usage of those who don't download Firefox, Chrome, etc., when they get their Windows machine. But I would contend there is is also a floor of Firefox users, who are attached to particular extensions and features which are unique to Firefox. And, these Firefox users are probably much more fundamentally loyal to their product than IE users. So it will be interesting to observe the long term trend, and see if Chrome eats into IE or Firefox usage more in the future.