The Revolution Should Not Be Digitized--Put It on Microfilm Instead

The siren song of digitization is one we are hardly even trying to resist. E-books are outselling hardcovers on Amazon, the Beatles sold over 2 million songs on iTunes in a week, and you can read 350-year-old scientific papers online. But why should we fight it? Digital media is cheap, it's easy, and it's clutter free. But like all of the siren's attempted seductions, digitization is an attractive tune with a twist. The convenience that digital storage offers now will more than likely be made up for in future headaches. So a pair of researchers recommend that we bring some analog back into our lives. Steffen Schielke and Andreas Rauber are neither picky audiophiles nor hoodie-clad hipsters, they're computer scientists, and they are worried about the long-term storage of all this data we're collecting. Magnetic tape, floppy disks, CDs and DVDs have all more-or-less come and gone in the last 80 years. While trying to find the equipment and expertise to actually use the different formats can be a burden, there are also issues with software, say Schielke and Rauber, the authors of a new study on the future of data archiving published in the International Journal of Electronic Governance. You may have even experienced this before. As Brien Posey recalls on the TechRepublic blog: 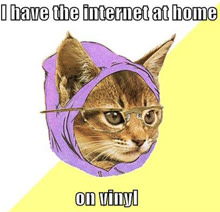 Fifteen years ago, I stored my archives on Zip disks. They were a good choice at the time because they were relatively inexpensive and you could fit a whopping 100 MB of data on a single disk.

Today, though, Zip disks are pretty much extinct. I still have my old Zip drive, but it connects to a PC via a parallel port. Like the Zip drives themselves, parallel ports are also extinct, so I can’t read the data from the Zip disks.

The problem really kicks in for people who are trying to maintain records for decades or longer, like governments or librarians. Every time a storage medium goes obsolete, the whole archive needs to be flipped over to a new format, taking time, money, and opening up room for errors. Schielke and Rauber's solution is to switch everything over to a format called microfilm

, a 200-year-old technology which stores information as tiny images and can be read with nothing more than a good magnifying glass. Microfilm can last for over 500 years if it is stored properly, and using a barcode system allows error-free storage densities of around 14 kilobytes per image, say Schielke and Rauber. The information is easily re-digitized, saving us from the strained eyes and late nights previous generations experienced hunkered over microfilm at the library. It's more than a little ironic that one of the proposed solutions for our data storage woes might be solved by a technology that led us to embrace digitization with open arms (Hipster Kitty would be proud). But with the Library of Congress now archiving tweets and websites

, I can't help but worry about the historians of the future, lest they be crushed to death under a pile of microfilm in the Justin D. Bieber Wing

80beats: Self-Organizing Nanotech Could Store 250 DVDs on One Coin-Size Surface

DISCOVER: In the Race Between Optical and Magnetic Storage, We Win

DISCOVER: Think Tech One Hundred Movies on Just One Disk

Image: I Can Has Cheezburger?