The Real Problem With a Human Trip to Mars: Radiation 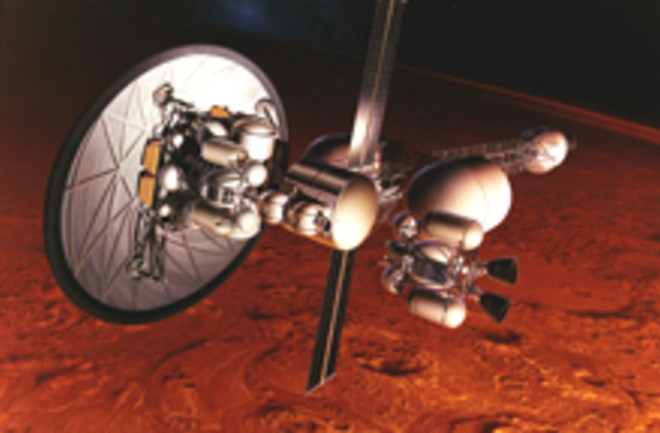 The presidential panel that recently evaluated the U.S. plan for manned spaceflight declared that “Mars is the ultimate destination for human exploration,” but stressed the financial and technical difficulties that must be overcome before a boot can be planted on that red soil. Now, the New Scientist calls attention to the greatest technical hurdle: protecting astronauts from radiation during their trips to Mars.

The radiation comes in the form of cosmic rays, which are actually speeding protons and heavier atomic nuclei that rain onto our solar system from all directions. They can slice through DNA molecules when they pass through living cells and the resulting damage can lead to cancer [New Scientist]. The residents of Earth and the temporary lodgers at the International Space Station are protected from the rays by the Earth’s magnetic field, but astronauts heading to Mars would have no natural protection. Aluminum or plastic shielding on a spacecraft would have to be impractically thick to safeguard astronauts, and other solutions, like the creation of a miniature magnetic field around the spaceship, are still being developed.

Researchers say that a round-trip mission to Mars orbit (which would take about 750 days) could give astronauts a dose of radiation that’s four times more than the lifetime exposure limit spelled out in NASA’s safety rules. Still, the presidential panel didn’t rule out such missions, but instead asked NASA if it would consider simply accepting higher risks for the missions. Steven Lindsey, head of NASA’s astronaut office, thinks most astronauts would probably be open to the idea. “It depends on the individual,” he says. “I’ve got crew members that will fly on anything” [New Scientist].