At every point in space, there is something we call the "electric field." It's a tiny vector, a quantity with a magnitude and a direction. If you want to measure it, just put an electron at rest at that point, and watch it start moving. The direction and size of its acceleration (over and above what we get from gravity) is proportional to the electric field. Typically, if you watch closely enough, you'll see our little electron jiggle back and forth like mad. That's because the electric field doesn't just sit there; we are surrounded by an extraordinary superposition of all kinds of electromagnetic waves, pushing by us with different amplitudes and directions and frequencies. If you build the right type of gizmo with an appropriate collection of electrons, you can pick out just a single wavelength from amidst the cacophony. Voila! You are listening in on the electromagnetic spectrum. In the modern world, there are an awful lot of devices out there communicating by shooting electromagnetic waves at each other. In particular in the radio frequency range (roughly between 10 kHz and 300 GHz), which has the nice property that its waves aren't blocked by annoying things like walls or air. This means that everyone building such devices wants to produce waves at some part of the spectrum, and that in turn means that the right to do so is an extraordinarily valuable commodity. In the US, the Federal Communications Commission gets to decide who can do what at various different radio frequencies. This state of affairs has come into the news once again, as wireless carrier AT&T has swallowed competitor T-Mobile; many people would be unsurprised if Verizon counters by swallowing Sprint, leaving us with a duopoly and possibly giving consumers the squeeze. Currently big chunk of spectrum is allocated to broadcast TV, which some are arguing is a waste, since you could stick a lot of mobile data devices in there and everyone has cable anyway. All very fascinating, but somewhat over my head. I'm more of a theoretical kind of guy. I just wanted an excuse to link to this gorgeous chart (pdf), showing how the spectrum is currently allocated. 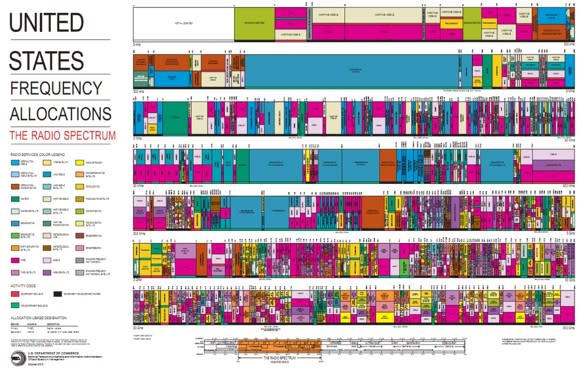 Click for much bigger and more legible pdf version. There's a lot going on here; see the zoom-in of a tiny region near 30 GHz: 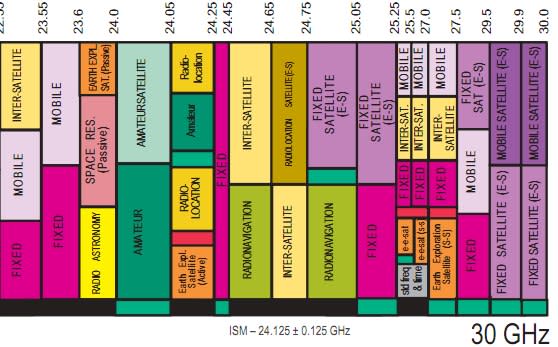 Nice to see that there is space carved out for scientific research, including radio astronomy. Those jiggling electrons have a lot of work to do, let's hope they can keep everything straight.