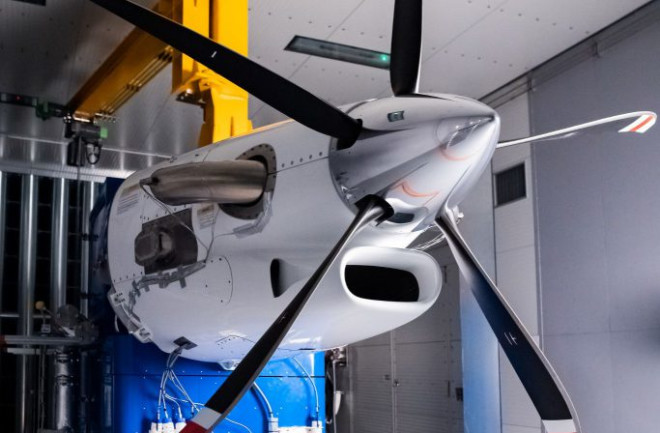 One-third of GE’s Catalyst engine, a turboprop set to fly in the Cessna Denali, is 3D printed. It has the most 3D-printed parts of any plane engine in the world. (Credit: GE Aviation)

In 2014, eight engineers started a secret project behind the walls of GE Aviation’s headquarters. Their challenge? Build an aircraft engine with 3D printing instead of traditional manufacturing.

The engineers wanted to make an engine with fewer parts than normal – way fewer parts. The normal CT7 turboprop – a small engine that’s commonly used in helicopters – has about 900 pieces to it. By the time they finished their new prototype, dubbed the aCT7, the engine only had 16.

At the time, the engineers weren’t fixated on putting the engine into an actual aircraft. But their design experiment paved the way for an even bigger endeavor – creating a 3D-printed engine for an actual airplane that will carry actual passengers.

Five years later, GE’s partially 3D-printed engine, called the Catalyst, is set to fly in an airplane called the Cessna Denali by the end of this year. It’ll have more 3D-printed parts than any other aircraft engine in the world. And it could help pave the way for a more efficient, cost-effective and eco-friendly future for aviation.

3D printing has come a long way since it first won over the Makerspace crowd more than a decade ago. You can now press a button and make a flamethrower or even a tiny replica of yourself. And on a grander scale, the industry is booming – it was reported to be worth over $7 billion in 2017.

But 3D printing has yet to fully “disrupt” the aviation industry. And its full potential has yet to be unleashed. GE’s Catalyst, however, is already showing promising results.

The engine has seen several successful test runs. It’s now set to take to the skies on an official first flight in the coming months on a prototype made one-third from 3D printed parts.

The Catalyst engine has been tested by GE in the Czech Republic and Canada. (Credit: GE Aviation)

Though 3D printing (also known as additive manufacturing) is still relatively new to the field of engineering, its roots date back to the early 1980s. An engineer named Chuck Hull pioneered the first 3D printer in 1983, making trinkets out of photopolymer that eventually led him to patent the process a year later. Hull went on to create a business – 3D Systems, which makes and sells 3D printers, and which he is the CTO of today.

Fast forward to 2011. That’s when GE design engineer Josh Mook was assigned to help build a fuel nozzle tip as part of a joint project between GE and Safran Airlines in France. GE had already had an additive manufacturing groups since the 1990s, Mook says, but this was the first big project that significantly used 3D printing.

The existing fuel nozzle they hoped to replace was small enough to fit in the palm of your hand, but deceptively complex. Building the part required more than 20 pieces that had to be welded and brazed together.

They hoped that 3D printing would let them make the nozzle tip layer-by-layer, instead of piece-by-piece. GE also gave Mook and his teammates creative freedom to experiment with new features to make the part more fuel-efficient. And another perk? The digital design let them to add to the part for virtually no extra cost, and have their prototype ready to test on a shorter timeline.

“Complexity is free,” Mook says. “Today I can do something and tomorrow I can have it.”

A rendering of the Cessna Denali, a single-engine turboprop created by Textron Aviation that will house GE’s Catalyst engine. The plane is set to have its first official test flight by the end of 2019. (Credit: Textron Aviation)

So when the Catalyst project officially kicked off in 2015, a design and building process that normally could have taken around a decade was condensed down to two years. Test runs in 2017 in the skies over the Czech Republic went well, Mook says. And now the Catalyst is starting its testing with the FAA, which he says is an “incredibly significant hurdle.”

If all goes well, the engine will fly in the Denali by the end of this year, according to its manufacturer, Textron Aviation.

The success of the Catalyst could be a hint at the far distant future of aviation. Instead of just building planes, we’ll print them.

And it’s not just the production process that will be simplified. Mook says 3-D printing could make it easier to repair and maintain engines and make it less likely for individual parts to fail. Plus, simplified manufacturing could help reduce the aviation industry’s notoriously heavy carbon footprint.

But Mook also notes that the workforce needed to engineer via additive manufacturing tech isn’t readily available. Much of the designing is done in computer models. And while engineers fresh out of school might be tech-savvy, they’re likely not highly skilled in the specifics of additive manufacturing. Yet those who have been in the workforce for decades might be hesitant to accept these new ways of doing their craft.

“Big changes are rarely accepted,” Mook says, thinking back on the days when the aCT7 project was in its secretive beginning stages. “I think we’re just at the tip of the iceberg with what we can do in this space.”