The Physics of Bras 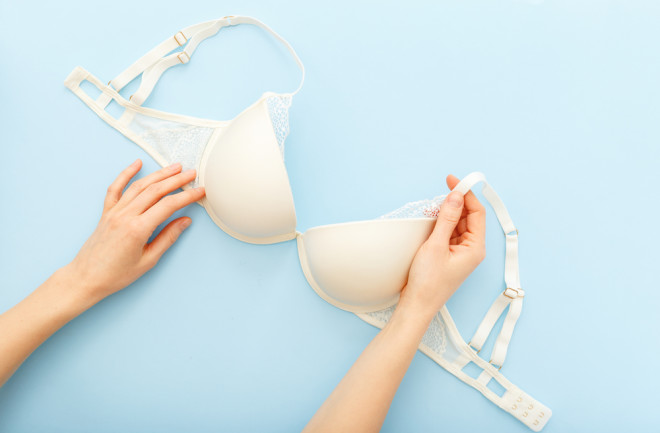 One side effect of the obesity epidemic in America is rarely noted: Women's chests are expanding nearly as fast as their bellies. Poor eating habits, as well as breast implants and the estrogens in birth-control pills, have led to an increase in the past 15 years of more than one bra size for the average American woman — from a 34B to a 36C. For many women, this has been a burdensome trend. A pair of D-cup breasts could weigh anywhere from a few pounds to as much as 20. The larger the breasts, the more they move and the greater the discomfort. In one study, 56 percent of women suffered from breast pain when jogging.

"Women will limit themselves from doing exercise because of their breasts," says Deirdre McGhee, a sports physiotherapist and graduate student in biomechanics at the University of Wollongong in Australia. "They actually deprive themselves."And the less they exercise, the more obese and buxom they may become.

For most women, a good bra is still the best remedy. According to the American Apparel and Footwear Association, nearly 500 million bras were sold in the United States in 2001; last year, sales totaled more than $5 billion. As breasts have grown, so have the demands of customers, the scientific sophistication of bra design, and the competition among bra manufacturers. "Women like their bras to be sexy and sensual and comfy and supportive," McGhee says. "And to get all that is rare." Yet after nearly a century of experimentation, the perfect bra may well be in sight.

Bra designers begin with a significant handicap: The structure of breasts is still something of a mystery. Evolutionary biologists aren't sure why breasts evolved as they did — chimpanzees and other mammals develop them only when lactating — and no one knows what keeps them from sagging. An individual breast is made up of between 15 and 20 sections, known as lobes. These are composed of smaller lobules that end in bulbs that produce milk and are interconnected by a network of ducts. But breasts contain no muscles at all, and the bulbs and ducts are essentially the same in all women. Size is mainly determined by how much fat the breasts contain. Most anatomists believe the breasts' primary means of support are the Cooper's ligaments interlaced among the lobules. But others give the skin more credit.

To best support breasts, a designer has to understand how they move. To that end, McGhee's team in Australia, headed by biomechanist Julie Steele, tags women with light-emitting diodes and asks them to run on treadmills. (The women run with and without bras, so the laboratory doors are bolted to prevent uninvited people from bursting in.) Computer systems then track the breasts' motions in three dimensions by following the moving lights. "We can actually work out exactly where they're going, how they're moving, and how this movement is affected by bras," Steele says. Breasts move in a sinusoidal pattern, Steele has found, and they move a lot. Small breasts can move more than three inches vertically during a jog, and large breasts sometimes leave their bras entirely. "We have videos of women who, particularly if the cup is too low, spill all over the top," Steele says.

The larger the breasts and the more they move, the more momentum they generate. To change or stop that momentum requires a large force, usually applied through bra straps. When straps are thin, the pressure exerted through them can be so great as to leave furrows in the shoulders of large-breasted women. As the straps dig into the brachial plexus, the nerve group that runs down the arm, they may cause numbness in the little finger. In some cases, breasts can slap against the chest with enough force to break the clavicle.

"Force equals mass times acceleration," Steele says. "That's Newton's second law. You have a large mass, and it's going quickly, and the force is going to be large. If you have breasts that are slapping down and hitting the chest and having to come back up, they accelerate very quickly." No one really knows the long-term medical consequences of "excessive breast bounce," as Steele calls it. But it can cause pain and is the most likely reason for sagging breasts.

There are two ways to keep breasts from moving: encapsulation and compression. Encapsulation bras look like the old-fashioned brassieres our grandmothers wore, with large molded cups that completely contain the breast. Compression bras are more popular but less comfortable: They squash the breasts against the body, thereby reducing the amount of weight the bra has to cantilever.

Since the 1800s, when women used corsets stiffened by whalebone to support their breasts, bra designers have experimented with innumerable structures and materials. "Making a bra is like building a bridge," says Manette Scheininger, a senior vice president of design, merchandising, and research and development at Maidenform. "You have weight that has to be uplifted. You have to have support all around." Larger breasts compound the challenge, Scheininger says. "And not just by a little bit. The challenge grows dramatically."

The first sports bra was created in 1977, when two American women took a pair of jockstraps, cut them apart, and sewed them back together. They dubbed their creation the Jogbra. Other bra designs since then have used gel and water pads, silver fibers that cool the skin and dispel bacterial growth and body odor, and air bags that wearers can pump up to enhance the appearance of their breasts. This past summer, a virtually stitchless bra was introduced by Wacoal, a leading manufacturer. The bra is molded, compressed, and shaped at the same time — "sort of like a car fender," Wacoal designer Linda Hyde says. Thanks to cylindrical hosiery machines, other bras can now be knit in circular patterns with differing amounts of stretch and support.

Steele's team is taking fabric technology another step. Six years ago, her laboratory, in collaboration with the University of Wollongong's Intelligent Polymer Research Institute, began work on the world's first smart bra. It uses intelligent materials and electronic textiles to sense when breast motion increases and tighten appropriate parts of the bra in response. "When you're sitting around the office, it isn't restrictive," Steele says. "But if you need to run for a bus or something, it will sense that you've started to run, and it will give you the support of a sports bra." Steele's lab has teamed up with Marks & Spencer, a major retailer in Britain, to further develop the project.

Meanwhile, McGhee and Steele have their sights set beyond tinkering with bra straps and fabrics. They are using Steele's extensive work on the biomechanics of breasts to explore an entirely new way of designing bras. Starting in the 1970s, podiatrists and biomechanists radically redesigned running shoes to make them lighter and more stable. Steele and McGhee hope to accomplish a similar paradigm shift and correct the problem with the most supportive bras: They are also rated the most uncomfortable. "We're not testing a product but a concept," says Steele. "What we're trying to bring in now is an idea that will not be a gimmick — understanding the structure, function, and the movement and putting them all together with the science underpinning it."

Steele and McGhee are reluctant to divulge any details for fear of tipping off rival designers — "It's a really dirty game," McGhee says. But initial trials are under way while they stake out intellectual property rights. Given that more than 30 percent of American women now wear D cups and larger, the team shouldn't have trouble finding a commercial partner if they succeed. When it comes to bras, the usual rules of exercise are reversed: No pain, very much gain.