The Next Generation of US Cyber Warriors 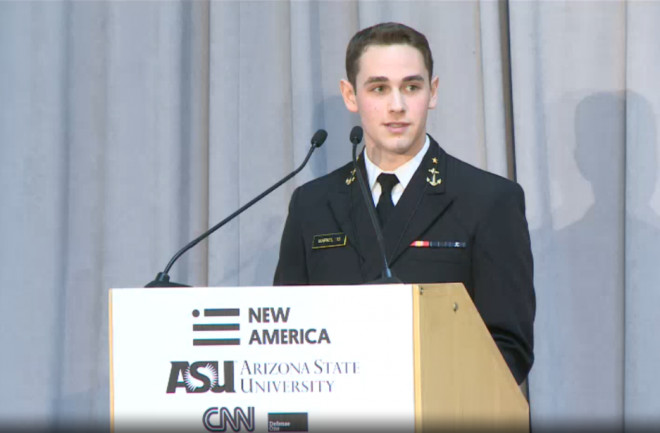 Credit: New America Foundation Zane Markel has never known a world without the promise and perils of the Internet. The young native of Bismarck, North Dakota represents one of the first midshipmen at the U.S. Naval Academy who will commission directly into the Navy's information warfare community after graduation. That honor makes him part of the newest generation of U.S. cyber warriors at a time when computer-driven systems have become both the strength and Achilles' heel of modern military forces. The path to becoming a cyber warrior was paved by early awareness of the dangers posed by cyber attacks. In eighth grade, Markel read a Discover Magazine article about botnets taking over hundreds of thousands of computers. Next came the slew of headlines about Anonymous, a loosely-organized "hacktivist" coalition, hacking the websites of companies and organizations ranging from PayPal to the Church of Scientology. Near the end of high school, news stories focused on the Stuxnet computer worm that had crippled Iranian centrifuges which could be used to enrich nuclear material for either reactors or weapons. The fact that the people who launched such cyber attacks seemed to mostly get away without retaliation left a strong impression on Markel. "I graduated high school with the firm impression that any computer-controlled device could be hacked, and that defense and law enforcement institutions were powerless to stop it," Markel said. Markel's personal reflections came during his speech at the first annual Future of War conference hosted by the New America Foundation, a think tank based in Washington, D.C., on Feb. 25. The midshipman described how his views of cybersecurity and the possibility of defending against cyber attacks began to change once he enrolled at the U.S. Naval Academy in Annapolis, MD. His first lesson came in a freshman-year cybersecurity class that showed students how easy it was to hack the unsecured course website. The professor then flipped the lesson on its head by showing how to better secure the website with just five minutes of extra coding. During his freshman year, career inspiration for Markel also came from reading about Alan Turing, the famous English mathematician who founded theoretical computer science and served as a codebreaker during World War II. Turing's work with other researchers helped break the secret codes of Engima, a Nazi German machine used to encrypt high-level military messages. That pivotal breakthrough gave Allied commanders critical information about German bombing raids, the movements of German submarines and ships, and German war plans at the highest levels. (The mathematician's life recently featured in the Oscar-nominated film "The Imitation Game.") Markel took similar inspiration from the crucial work of U.S. Navy codebreakers whose success in cracking Japanese military codes helped win the Pacific theater of World War II. For instance, the code-breaking efforts helped the U.S. Navy anticipate and ultimately beat back the Japanese Navy's attempt to attack the island of Midway, a crucial victory which also led to the sinking of four Japanese aircraft carriers with the loss of just one U.S. carrier. That battle represented the turning point in the war in the Pacific. "These stories convinced me that cybersecurity would have an equally essential and decisive role in 21st century conflict," Markel said. "I decided that if I was going to have any shot at having a major positive impact in the world, it would be as a Naval information warfare officer. The World War II codebreakers may have decrypted enemy messages, but cyber warriors could have an even greater impact in future wars that rely heavily upon highly automated technologies. That's especially true for the U.S. Navy, given how many computer-driven systems are aboard U.S. Navy ships and submarines. Cyber attacks could prove fatally disruptive for such computer systems in the heat of battle and cripple the U.S. military's powerful capability to effectively coordinate its own ground, sea and air forces. For many of those reasons, the U.S. information warfare community may need up to 100 graduates like Markel every year to meet the challenges of future conflicts.