The Navy Is Designing a Drone That Flies and Swims 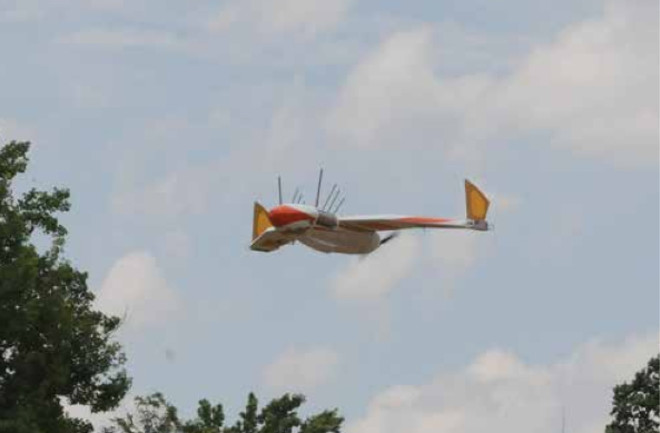 The latest prototype of the Navy's duck-like drone. (Credit: United States Naval Research Laboratory) The United States Navy is incredibly interested in developing undersea robots and flying robots. So why not find a drone that can do both? That’s exactly what the Naval Research Laboratory’s Flimmer Program aims to do. Early prototypes of the Flimmer — a portmanteau of “flying swimmer” — have successfully been launched from a plane at 1,000 feet, splashed down on the water’s surface, then dove underwater reaching speeds of 11 miles per hour. Though the drone’s design still needs a lot of tweaking, it could someday be used to hunt enemy submarines from the air and sea. The biggest hurdle for Flimmer’s designers is that water is roughly 1,000 times denser than air. Weight is the enemy of a flying drone, as heavier aircraft require more lift to stay airborne. Underwater craft, on the other hand, are built to be thick and heavy to protect electrical components from crushing under pressure. The Flimmer needs to be light enough to fly, yet strong enough to handle the impact of a splashdown and water pressure. The latest version of the Flimmer is called the Flying WANDA, for “Wrasse-inspired Agile Near-shore Deformable-fin Automaton.” It has fins tucked away at the end of its wings that fold upward to stabilize the craft in the air, while a rear propeller provides the thrust. In the water, the rear fins, and a pair of fins near the front of the body, are used to steer. In the air, WANDA can reach speeds up to 57 miles per hour, and clock 11 miles per hour underwater.

The Flimmer splashes down. (Credit: United States Naval Research Laboratory) The Navy envisions using their duck-like drone to provide quick reconnaissance by flying to a location, landing in the water and following an enemy submarine. Engineers will continue to alter the Flimmer’s design to improve its air-to-sea abilities. However, there's no timeline for when the Flimmer will be deployed in enemy waters.