The Mystery of a Virgin Galactic Pilot's Error 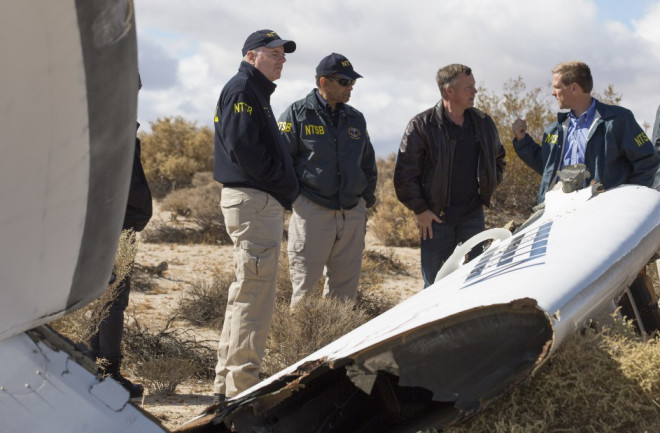 Acting Chairman Hart w/ Virgin Galactic pilot Todd Ericson & investigators at SpaceShipTwo accident site. Credit: National Transportation Safety Board Nobody knows exactly why Michael Alsbury, copilot of Virgin Galactic’s SpaceShipTwo, made the fatal mistake of unlocking a braking system too early during a rocket-powered test flight that had reached speeds of over Mach 1 on Oct. 31. The resulting disaster tore the wings off the futuristic space plane in mid-flight, killing Alsbury and forcing pilot Peter Siebold to parachute to safety with a shoulder injury. But the history of modern aviation accidents suggests that human error is rarely just about the mistakes of a single pilot. The fact that human error is responsible for a majority of aviation accidents does not necessarily mean pilots were being sloppy or unskilled. Such cases are usually less about "bad pilots" as they are about the human brain's common cognitive biases and limitations in certain situations, says Ben Berman, a 737 pilot for a major U.S. airline and a principal consultant of Berman Aviation Associates, a consulting and management firm focused on aviation safety. Berman coauthored a book in 2007 titled "The Limits of Expertise: Rethinking Pilot Error and the Causes of Airline Accidents," along with two former colleagues from the Flight Cognition Lab at the NASA Ames Research Center. By looking at recent aviation accidents, they concluded that individual pilot errors were often the unsurprising results of other factors at work. "If you put 1,000 pilots in the same situation, would you expect them to do the same thing or not?" Berman says. "In most cases, yes, you would expect people to make the same mistake."

The Story Behind Human Error

This "human performance" or "human factors" way of thinking in aviation has roots in a World War II mystery. A number of U.S. fighter and bomber pilots were making the mistake of retracting their aircraft's wheels instead of the wing flaps after landing, resulting in the equivalent of belly landings. Lt. Alphonse Chapanis, a U.S. Army Air Force psychologist at Wright Field in Dayton, Ohio, eventually figured out that the aircraft involved in such cases — the P-47 fighter, B-17 bomber and B-25 bomber — had nearly identical wheel and flap controls sitting side by side in the cockpit. "Human error" had turned out to be a cockpit design error. The U.S. Army Air Force fixed the problem by attaching a small, rubber-tired wheel to the wheel control and a wedge-shaped symbol to the flap control. That quick fix immediately stopped the problem of pilots retracting their wheels after landing.

Emergency wheels-up landing of Boeing B-17 "Duchess Daughter" of the 303rd Bomb Group, 359th Bomb Squadron. Credit: U.S. Air Force "If it’s a bad pilot, you fire them," Berman says. "If it’s people not being careful enough, you can send out a memo. If it’s inadequate training, you train them better. But training can’t really compensate for a badly-designed display or piece of equipment." Neither the firing nor memo options are likely to be effective, Berman added. It's still far too early to say whether a bigger issue lies beneath the human error that led to the crash of Virgin Galactic's SpaceShipTwo. But the U.S. National Transportation Safety Board announced that it had assigned a human factors expert to piece together the puzzle behind the copilot's action that led to the destruction of Virgin Galactic's space plane. That expert will likely spend time collecting the life histories of both SpaceShipTwo pilots and understanding what they did up to 72 hours prior to the disaster, including details such as the nutrition in their diets and how much sleep they got at night, Berman says. The investigation may also look at Virgin Galactic as an organization to better understand the company's safety culture concerning test flights.

Berman is very familiar with the National Transportation Safety Board (NTSB) as a former chief of the major investigations division for the NTSB. His job included listening to the cockpit black box recordings in a number of aviation accidents, as well as interviewing surviving crew members. "You get a very sobering, very powerful thing that is revealed to you as you sit there and hear what’s going on for the first time," Berman explains. "You learn a lot about not just the accident, but also what to be aware of in the future." Federal investigations of aviation accidents usually include an operations person in charge of looking at what happened in the cockpit and how it relates to training and flight procedures. The human factors expert might join the operations person in looking at the pilots' actions within the context of ergonomic factors such as vibration and heat stress in the cockpit that could affect a person's thinking or attention. Even the lesser distractions of cockpit operations in commercial jets can push human attention spans to their limits and cause inattentional blindness. When sitting in the observation seat of an airliner's cockpit, Berman has witnessed a pilot look directly at a lit-up indicator showing that the main cabin door for the aircraft is open and say that the light is off. https://www.youtube.com/watch?v=TOSNVJzZn90

In the case of SpaceShipTwo, the NTSB's team looked at video footage from inside the SpaceShipTwo cockpit that showed the fatal moment when Alsbury unlocked the vehicle's braking mechanism too early during the space plane's rocket-powered climb. That action allowed aerodynamic forces to forcibly move SpaceShipTwo's wing booms upward into a "feathered" configuration — designed to slow down the suborbital space plane during reentry — without the pilot or copilot actually commanding the vehicle to do so. The resulting stress apparently tore SpaceShipTwo apart. NTSB officials have said that they expect the full investigation of the SpaceShipTwo disaster to take close to a year. During that time, they'll examine possibilities such as whether the cockpit display was showing the correct information to the pilots at the time when the braking mechanism was unlocked, according to BBC News. The NTSB also has access to Virgin Galactic's telemetry data and external video to show what was happening with the space plane during the test flight. Federal investigators have been collecting pieces of the SpaceShipTwo wreckage from the ground. There is even the possibility of interviewing the surviving pilot, Siebold. But even all those pieces of evidence will likely never reveal exactly what was going on in Alsbury's head at the fateful moment, Berman says.

In the end, the human factors approach allows accident investigators to go beyond simply blaming human error and opens the possibility of fixes to prevent future errors. Sometimes the fix might involve making a certain action part of a checklist to ensure that the pilots devote more of their attention to the action.

NTSB investigators with the WhiteKnightTwo in Virgin Galactic's hangar in Mojave, CA. WhiteKnightTwo is the mothership that carries SpaceShipTwo before midair deployment. Credit: National Transportation Safety Board A particularly important action — such as making sure the landing gear of a commercial jet is down, fixed and locked before landing — may require both pilot and copilot to confirm the action verbally out loud. Or there might be a focus on training pilots to react a certain way when they see a certain display light or hear an audio alarm. There is also the possibility of taking the human pilots out of the loop on a particularly crucial action and automating the process. Commercial airline pilots have the luxury of being trained on standard procedures for both normal operations and also abnormal scenarios. By comparison, the Virgin Galactic test pilots were in the process of testing a relatively new space plane designed for suborbital space tourism flights in the near future; a process that can go "much more off script," Berman says. He added that test flights exist in part to develop such standard operating procedures and to figure out what can go wrong. The possibility of finding and eliminating sources of pilot error is especially crucial for Virgin Galactic's plans of launching a space tourism business. The company and its founder, Richard Branson, had intended the first SpaceShipTwo, named Enterprise, to fly the first paying customers to the edge of space at a ticket price of $250,000 per person sometime this year. Still, the human factors approach may yet offer some lessons for Virgin Galactic as the company presses ahead with building a second SpaceShipTwo that could fly sometime in 2015.