The Mechanical Turk: How a Chess-playing Hoax Inspired Real Computers 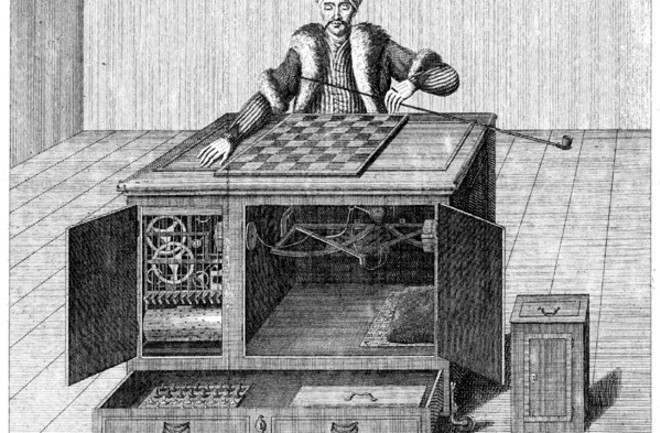 In 1783, an autonomous machine beat Benjamin Franklin in a game of chess. Well, at least that’s what he was led to believe.

Franklin’s opponent was a life-size, humanlike figure seated at a large wooden cabinet, supposedly rigged with machinery that made it capable of playing a game of chess without human support. It was known as the Turk.

Over 230 years after the automaton played its match in Paris against the founding father, e-commerce giant Amazon cribbed the name for its own facsimile automation project, the Mechanical Turk (mTurk). It’s a website that crowdsources an on-demand workforce to complete tasks that humans still outperform computers at.

Workers, colloquially known as Turkers, pick up small projects, or HITs, requested by people and companies around the world. They earn pennies per minute to do things like transcribe audio files, flag images for a social media site, or take surveys.

But why use humans instead of machines? Some menial tasks are still better completed by humans than computers. For example, bots can’t read a CAPTCHA with those funny handwritten characters, but you can.

But unlike Amazon, which built mTurk to rely on human intelligence, the operators of the original Turk spent over eight decades pretending the chess player was fully mechanical. The marvel of an artificially intelligent machine captured the curiosity of people around the world — even though it was later revealed to be an elaborate hoax.

Man in the Machine

Over the course of its roughly 84-year life, the Turk toured Europe and America, defeating many of its opponents and leaving audiences baffled as to how it worked.

It was the brainchild of Wolfgang Von Kempelen, a Hungarian inventor who created the machine in 1770 to entertain Maria Theresa, the Archduchess of Austria.

Von Kempelen and his successor Johann Nepomuk Mälzel had a ritual before each chess match — they would open all the cabinets and lift the Turk’s robe to show off the automaton’s inner machinery to the audience, demonstrating that there was no human inside. It baffled viewers and even sparked several theories, including one written by Edgar Allen Poe.

But after Von Kempelen’s machine was destroyed in a fire in 1854, a series of essays published in Chess Monthly explained how the Turk fooled its opponents for decades. The writer, Silias Weir Mitchell, was the son of the Turk’s final owner, John Kearsley Mitchell. He explained that the machine had housed a human chess player all along. The non-artificial intelligence inside could see their opponent’s moves via magnetized chess pieces on the board atop the cabinet. The player folded themselves inside the cabinet and could move the Turk’s arms and head to position the chess pieces.

However, Mitchell’s explanation didn’t stop curious minds from wondering if autonomous machines were theoretically possible. Before early computer pioneer Charles Babbage came up with the first concept of a programmable computer, he played twice against the Turk in 1819 and lost both times.

He was quick to call the machine a hoax, but the encounter stuck with him. In 1864, after he and Ada Lovelace developed the Analytical Engine, the first design for a general-purpose computer, Babbage expressed an interest in developing a machine that could play chess.

And building on Babbage’s inventions, Spanish mathematician Leonardo Torres y Quevedo created El Ajedrecista, the first hoaxless automaton to actually play chess without human assistance. Built in 1912, it was considered the first computer game in history, paving the way for the modern-day digitized chess masters of the 1990s, like Deep Blue.

So the story comes full circle – we started with human intelligence posing as machines, used that model to build machines that are artificially intelligent, and then reverted to what Amazon calls “artificial artificial intelligence” – or the very magic that made marvels like the Turk work in the first place.

Listening to the Brain to Improve Depression Treatment

AI Is Learning to Manipulate Us, and We Don’t Know Exactly How