The Man Who Takes Care of Stephen Hawking's Voice Speaks 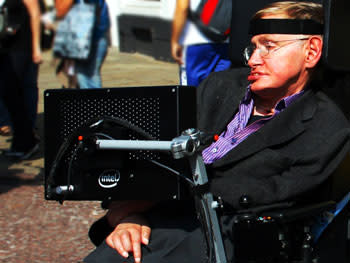 's voice is quite distinctive: the robotic monotone, emanating from an electronic synthesizer he's used since getting a tracheotomy, is instantly identifiable. But as his neuromuscular disease progresses, and as the technology he's using grows increasingly obsolete, his personal voice technician has to devise more and more workarounds. Sam Blackburn

, who's occupied the position since 2006, is now moving on, and the New Scientistspoke to him

about what the job entails. Blackburn says:

I guess the most interesting thing in my office is a little grey box, which contains the only copy we have of Stephen's hardware voice synthesiser. The card inside dates back to the 1980s and this particular one contains Stephen's voice. There's a processor on it which has a unique program that turns text into speech that sounds like Stephen's, and we have only two of these cards. The company that made them went bankrupt and nobody knows how it works any more. I am trying to reverse engineer it, which is quite tricky.Can't you update it with a new synthesiser? No. It has to sound exactly the same. The voice is one of the unique things that defines Stephen in my opinion. He could easily change to a voice that was clearer, perhaps more soothing to listen to – less robotic sounding – but it wouldn't be Stephen's voice any more.

Blackburn goes on to describe how exactly Hawking types in his words---with a muscle in his cheek---and how when he finally loses control of those muscles, the only other options will be using eye tracking or brain scanning. Blackburn's successor in the job, which requires about three months of foreign travel a year and the ability to work with electronics that lack any documentation or support

, will likely be involved in that switch.