Microfliers could search for missing people, detect bombs, and perhaps even deliver drugs inside the human body.

While Predator drones prove their mettle in Afghanistan and Pakistan, a new generation of far smaller flying robots is taking shape in various labs. These micro­­fliers may soon take on a variety of military missions and innovative humanitarian ones as well.

At the University of Waterloo in Ontario, microroboticist Behrad Khamesee has developed a flying robot about the size of a pencil eraser. A pair of laser-operated, fingerlike grippers allow the bot to grasp and release small objects. The device operates wirelessly, powered by a magnetic field. Kha­mesee hopes a version of the robot will someday zip around inside the human body delivering targeted drugs; first he needs to reduce the jitters in the bot’s motion. 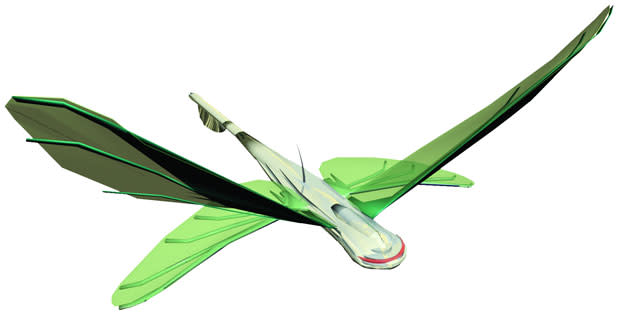 Mechanical engineer Haibo Dong of Wright State University in Ohio is working on a four-winged robot called the Wright Dragonflyer. The design is more difficult to create than a two-winged flapping system but promises greater speed and maneuverability. Dong expects to have a prototype, about the size of a real dragonfly, completed this year. “This small craft could perform surveillance, environmental monitoring, and search and rescue,” he says.

Another insect-inspired robot is taking shape at Harvard University, where roboticist Robert Wood is building on his 2007 development of a life-size mechanical fly to create a colony of RoboBees. These swarming robots will incorporate optical and chemical sensors as well as communication systems to make autonomous flight decisions and to coordinate with colony members during tasks such as searching for objects or people.

The military is in on the game too. The U.S. Army is teaming up with BAE Systems and academic partners, including the University of Maryland and the University of Pennsylvania, to build microfliers for intelligence and surveillance through its Micro Autonomous Systems and Technology Collaborative Alliance. “Our long-term goal is to develop technologies that can produce a map of a building interior or detect bombs,” says manager Joseph Mait of the Army Research Laboratory. Current prototypes include a sparrow-size flapping-wing craft and four-blade helicopter-style robots. The consortium will convene this spring with potential users in the Army to review the current state of the technologies.