The Latest Robot From Honda: A "Walking Assistant" to Push You Upstairs 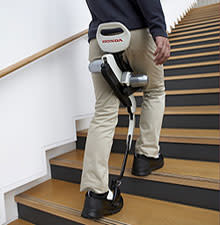 Honda's robotics division has unveiled the prototype of a strange new helper: a "walking assistant." Honda says the robotic legs could restore mobility to the elderly or infirm, and could help prevent factory workers from straining their muscles--if they don't mind being joined to the strange looking device. The user would employ the device by stepping into a pair of shoes attached to jointed legs.

The legs support a mildly-scary looking U-shaped saddle, which cups the wearer's groin and buttocks firmly to deliver solid uplift.... Honda say that the machine reduces load on the hip joints, and helps not just with walking but also standing - and especially with maintaining a crouched position [The Register].

The device, which weighs about 14 pounds and is powered by a motor and Lithium ion battery, is the result of Honda's nine-year-old initiative to develop mobility-assisting technologies.

The creation of the device borrowed heavily from the walking research that went into Honda's advanced humanoid robot, ASIMO [Daily Tech].

Honda hasn't yet announced plans to begin selling the walking assistants, but tests of the prototype will begin this month. Honda plans to test out the device on workers in its Saitama car factory, and says the devices could be a great boon to workers who crouch down along the assembly line. And while the robotic legs aren't suitable for paraplegics or people with serious muscle control issues, they could give a necessary boost to people with weak leg muscles, or patients recovering from accidents or surgery.

The need for such mechanical help is expected to grow in Japan, which has one of the most rapidly aging societies in the world. Other companies are also eyeing the potentially lucrative market of helping the weak and old get around. Earlier this year, Japanese rival Toyota Motor Corp. showed a Segway-like ride it said was meant for old people. Japanese robot company Cyberdyne has begun renting out in Japan a belted device called HAL, for "hybrid assistive limb," that reads brain signals to help people move about with mechanical leg braces that strap to the legs [AP]. 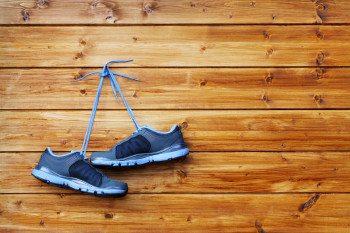 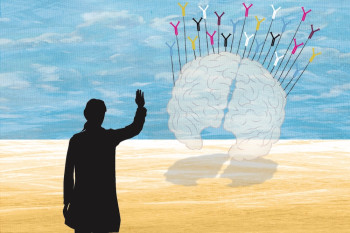