The Last Thing the Squirrel Saw

We have to assume it was a squirrel, but we know how it died. It died squirming and convulsing in the talons of an owl, locked in by the bone ratchets the owl shares with other raptors. Based on what was left behind, we also know that the attacker was likely a Great Horned Owl or a Northern Hawk Owl with a wingspan between 86 and 87 centimeters. All of this we can glean from a striking impression of a deadly strike. 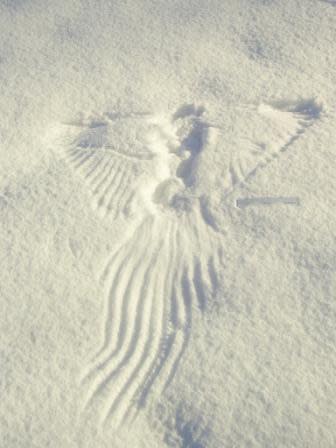 There is perhaps no evidence of a kill more beautiful than these wing-prints left in the frigid Timiskaming, Ontario snow. Like throwing flour on the invisible man, the snow lets us see the tracks of an invisible predator—invisible at least to the squirrel. With hearing good enough to sense rodents and other prey inches under the snow, owls feed by plunging their talons deeply through the drifts and into their prey. In the summer, the last thing many small mammals see is the owl. In the winter, strategies change, and many owls supplement their mammalian meat with that of small ground-dwelling birds like grouse. No matter the food, the killing itself isn’t pretty. Hawk owls in particular eviscerate small mammals before eating their heads and organs, thereafter caching the remains. An owl can triangulate a scurrying vole better than you or I ever could, but the kill is not always so graceful. The hole at this kill site is likely enlarged by the repeated digging that is necessary to finally pierce a vole or grouse. Often in science, we are unfortunately relegated to tangential, rather than direct, observation. To test the most obtuse "multiple universe" theories, for example, we might be able to look for boundaries where universes affect each other, but never the universes themselves. We have never seen a single electron, but stipulate its existence because of how atoms interact and how chemical reactions progress. Likewise, we never saw this owl swoop from the sky to puncture a helpless squirrel, but the wing-prints tell the story, a story about survival. The owl's wingtips etched a testament to this unseen battle in the Canadian snow. Sitting happily atop the food chain, we are oblivious to the intricacies of animal survival until our attention focuses on it. It takes something striking to raise the minutia of daily subsistence to conscious wonderment. Sometimes it takes an impression of feathers, frozen, somber. It was the last thing the squirrel ever saw. Image:Gavin Murphy