'The Last Jedi' Revealed the Dark Side of BB-8 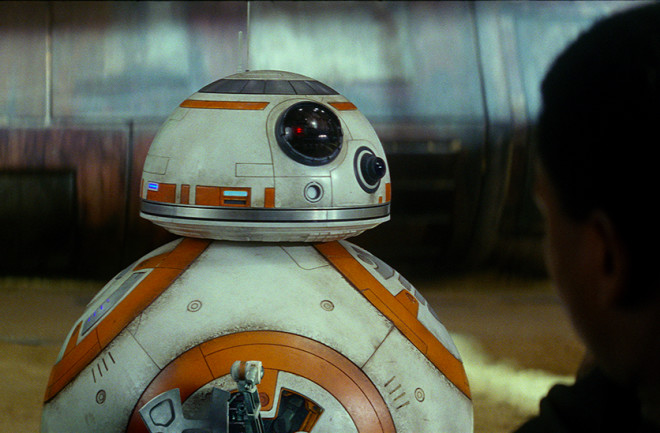 The clever and adorable repair droid BB-8 is a popular face of the new Star Wars film trilogy by Disney. Credit: Disney Robots can provide comic relief and cuteness overload for longtime fans of the Star Wars films that take place in a galaxy far, far away. The latest example in Disney's Star Wars films is the adorable BB-8 droid that has a dome head riding atop a spherical body and mostly communicates through beeps and electronic warbles. But something dark and ominous may be lurking beneath the bubbly droid's exterior. Turn back now to avoid spoilers on "The Last Jedi" or any of the Star Wars films. The small droid BB-8 shares many charming and heroic qualities with R2-D2, another popular Star Wars robot from the original film trilogy and a predecessor of sorts to BB-8. Both droids have generally proven themselves to be brave and loyal companions to their human counterparts, capable of expressing a wide range of emotions such as joy and sorrow. They have also saved the main Star Wars heroes and heroines more than once through their skills in repairing starships or hacking electronic systems. Both BB-8 and R2-D2 have even occasionally used their electric zapper tools such as nonlethal weapons against humans and other sentient organic beings. In the film "The Last Jedi," BB-8 appears to continue that tradition of nonlethal combat while assisting his friends in tough situations. The droid uses mechanical constraints and even turns casino coins into improvised projectiles while disabling a number of security guards on Canto Bight, a location unofficially referred to as the casino planet. But toward the end of "The Last Jedi," BB-8 appears to break with his own programming and the nonlethal tradition by using deadly force against some First Order stormtroopers. When his friends are in danger, BB-8 somehow finds his way into the cockpit of an AT-ST walker vehicle and proceeds to use the military vehicle's blaster cannons to blow away a number of stormtroopers.

Rise of the Killer Robots

This is fairly astounding and remarkable for several reasons. First of all, BB-8 was designed and built as one of many astromech droids that serve as mechanics by repairing starships. It's safe to say that such droids were definitely not designed for combat or operating military ground vehicles on their own. Yet the film clearly shows BB-8 as having figured out how to manually control a First Order military vehicle with a user interface designed for humans. Second, most droids in the Star Wars galaxy are presumably programmed with something along the lines of "thou shalt not kill living beings" as a safeguard. Evidence for such a commonsense measure comes from "Star Wars Rogue One: The Ultimate Visual Guide," which mentions how most Star Wars droids have "the standard restriction against harming organic sentient lifeforms." BB-8's actions in blasting the human stormtroopers show that the adorable droid has somehow evolved or figured out a way to override its initial programming. Previous Star Wars films such as the prequel trilogy did feature armies of battle droids designed specifically for combat. Even "Rogue One," the standalone film that takes place just before the original trilogy in the Star Wars story timeline, features the reprogrammed Imperial security droid K-2SO gunning down or tossing grenades into clusters of Imperial stormtroopers. But such battle droids and security droids were specifically designed to be exceptions to the rule of droids doing no harm to living beings. For the first time in a Star Wars film, BB-8's murderous demonstration shows how a robot can adapt and override its programming to commit murder.

Will this lay the groundwork for a Star Wars robot and artificial intelligence (AI) uprising in the style of the "Terminator" films? Probably not. The Star Wars films have generally shown no interest in exploring the broader implications of intelligent robots potentially becoming self-aware and defying their overseers. The overwhelming evidence from the films suggests that humans and other sentient aliens view droids as slaves or property at best. Droids such as BB-8 and R2-D2 are sometimes treated kindly by their human masters—"master" is a specific term used in the films—and are even considered close companions by some of the main Star Wars heroes and heroines. But nobody in the Star Wars films appears to ask questions about whether robotic beings deserve some legal personhood or status. Regardless of writer-director Rian Johnson's intentions for "The Last Jedi," his story transformed the adorable robotic sidekick into a murder droid with a will of its own. That would normally have huge implications in a science fiction story that wants to seriously explore a coherent and logical futuristic world setting. But like most Star Wars filmmakers, Johnson generally seems satisfied with merely creating an illusion of familiar technology that delivers cool visual storytelling, even if that leaves some of the bigger questions on the table.

Editor's Note: I removed referenced to BB-8 as "homicidal" because reader Ben Weiss correctly pointed out that a homicide involves the killing of a human being by another human.