The Internet May Soon Include All of the Things Around You

As wireless nodes become cheaper and more common, our electronic networks will expand to include many of the non-electronic things you really care about: your missing pants, a new shoelace, and the city’s best produce stand. 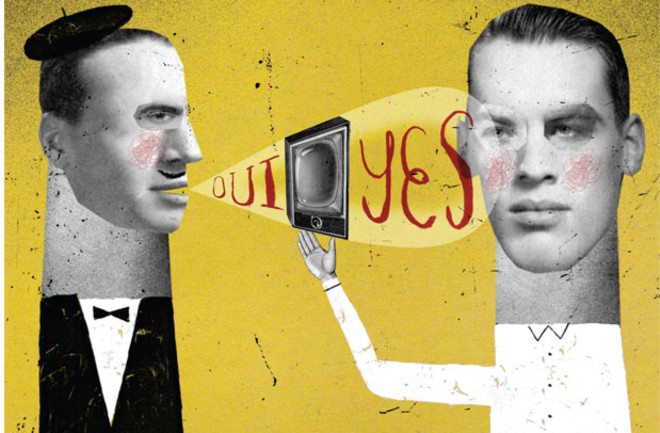 A universal translator could ease the plight of an American in Paris, or aid a diner trying to decide whether to order "cuy chactado" at a Peruvian restaurant. | Illustration by David Plunkert

A few months ago, I was hanging out at a cool-sounding conference in a gullible part of the country, tweeting to other attendees about how the session on “How Twitter Is Changing Your Life” was changing my life, when a thought occurred to me. I can effortlessly keep 24/7 tabs on every atomic-scale movement of my Facebook friends, but I still cannot go online to track down the things I really want to find—like my car keys, my iPod, and my long-missing Lord of the Rings embroidered-denim jacket.

It turns out I soon will be able to do exactly that, owing to the coming of something called the Internet of Things. Instead of connecting online with other people—who very likely are zombie spambots peddling pregnancy hormones as diet aids, or zombie humans insisting that the president of the United States is an alien—we will link up with the objects we own and love. Compared with our current “Internet of Whatever,” this could be a real step up.

It certainly will be for me. I want all my possessions to be networked so I can get in touch with them via a website or my phone. Please, network my pants so I can go to my pants’ website and find out if they’re in my closet or at the cleaners, or if they need to be brought to the cleaners. Network my bike, my leaf rake, my beer, and everything else so I can get up-to-the-minute reports on their location and status.

Then enable all my networked items to communicate among themselves so that, for example, my clothes will self-color-coordinate, my favorite foods will self-meal-plan and self-create a shopping list, and my umbrella and sunglasses will stop getting the weather wrong. Plus, everything from my toaster oven to my running shoes will coordinate with my credit card to replace themselves when their “check engine” light comes on.

You may say I’m a dreamer, but I’m not even slightly ahead of my time. In fact, I’m struggling to catch up with scientists like Dominique Guinard, who has been researching the Internet of Things since 2002. That’s when he was working in Geneva for the information-technology company Sun Microsystems, now Oracle, helping to spec out what was envisioned as a global network that by now would be tracking everything manufactured by anybody. The idea was that every product coming off an assembly line, along with the crate it was shipped in, would be slapped with a radio frequency identification (RFID) tag. Such tags, costing just a few cents, carry a small, non-powered chip that, when hit by radio waves from a nearby “reader,” converts some of the radio energy into its own radio pulse in return. That reply identifies the tag to the reader and thus to the global-things network the reader is connected to.

Over time, Guinard envisioned, tags would be equipped with ever-tinier sensors that could measure just about anything—temperature, moisture, light, motion—and report back. Companies would know not only where their stuff was but whether it was moved, stolen, damaged, or sold to me at a 300 percent markup.

At least that was the plan. “Walmart and some other big chains adopted it, but the global network never took off,” Guinard says with a sigh. “It didn’t help that people started believing it was an evil technology that could disrupt pacemakers, cause cancer, and track you. This was according to people who were carrying cell phones with a signal 100 times more powerful and that really does track you.”

But being, as he puts it, “supermotivated to create a world where everything is networked,” Guinard persisted, doing research at Lancaster University in the U.K. in a lab that created a mug equipped with a wireless sensor capable of telling you when your tea was cool enough to drink, while alerting your colleagues that you were taking a tea break in case they wanted to join you. Back in Switzerland, he continued his magnificent obsession as a researcher at ETH Zürich, a highly regarded technical university, where he helped another information-technology giant, SAP, create a system that allows assembly-line machines to talk to each other about hiccups and slowdowns and fire off e-mail warnings of production delays.

By 2007 Guinard had set up a demonstration project in which all the appliances, lights, and heating and air-conditioning units in a home were networked together to monitor and reduce energy costs. He soon realized that the Internet of Things would never have all that many things on it unless all of those things learned to speak the same language. Special software would have to be written to get each thing to explain to its sensor what it was up to, and then more special software would be needed so each sensor could explain these goings-on to the network in terms the network could understand. Otherwise, you would have just a bunch of things mumbling incoherently, like the late-night denizens of a big-city bus station. But writing all that software was way too much trouble for most would-be pants-trackers.

To address the problem, Guinard and two other researchers founded a group they called—what else?—the Web of Things to come up with standard, easy-to-use software so that networking a thing with a bar code or radio tag would be as easy as signing up for Gmail. “Then things started booming,” Guinard says, noting that a 2010 Web of Things conference received submissions from 31 research groups in 15 countries.

Today you can order a coin-size, wireless node containing a radio, microprocessor, battery, and GPS or other sensor, ready for pasting onto your favorite thing to hook it up to a home network, where it can have its own home page. I suppose you could sign it up for Facebook and Twitter, too, and I hope you do, because I’m positive your thing will have more interesting things to say than most of what I encounter there. Among the organizations that have developed nodes are Oracle and People Power (a start-up that develops wireless energy-monitoring systems), both in Silicon Valley, and the European Sensor Network Architecture Project in Sweden.

OK, so why, then, are my pants still missing? Part of the reason the Web of Things hasn’t reached us yet is money. Nodes still cost at least $20; that needs to come down to $5 to get things rolling, Guinard says. The other problem is that researchers and companies have been annoyingly slow in coming up with compelling Web of Things applications. There are environmental sensor networks that can monitor the health of crops, and you can buy large, expensive GPS sensors for tracking shipping containers. But what good does that do us consumers? Besides home-energy monitoring, the only apps Guinard could name as currently in play are shoplifting security for stores and soil-moisture monitoring for plant-care services.

MIT researcher Abel Sanchez thinks he has an app that could finally jump-start the consumer track-your-stuff business. Executive director of the school’s Geospatial Data Center, Sanchez was about to bite into an apple three years ago when he had one of those scientist moments: He suddenly wondered where the apple came from. His question eventually led him to an ambitious project that he says will allow consumers to track the fruit and vegetables produced by thousands of small farms in New England all the way through local farmers’ markets and even to the restaurants in which much of the produce ends up, all through a website or mobile-phone app. “Consumers are wondering about the provenance of the foods they eat,” Sanchez says. “We want to find healthier, locally grown food. And we keep hearing about massive food recalls.”

His project, now under way, requires farmers, markets, and restaurants to enter inventory data via their mobile phones, but he predicts that produce will eventually carry bar codes and even RFID tags. And once we’re comfortable tracking apples and brussels sprouts, there will be no stopping the Internet of Things. Don’t take my word for it; just ask the U.S. National Institute of Food and Agriculture, which is looking into sticking sensors onto everything from wheat to beef so it can be alerted to and track down spoiled food before it spoils your day.

We may not even have to wait for mass-marketed tags and readers in order to start tracking our stuff. Sanchez notes that as our mobile phones get smarter, they should be able to use their cameras to map and monitor what is around us and link that info to GPS data in order to create a map of our earthly possessions. Later you can ask your phone questions like “How many beers are waiting for me back at home?” and “Where did I leave the Advil?” Sanchez’s lab has already modified a Roomba vacuum cleaner to zip around a library taking inventory of tagged books, and built an automated mini-helicopter that swoops through a warehouse to take stock of tagged crates. Enabling a phone to create databases of things just by carrying it around wouldn’t be hard, he says. Guinard is developing a start-up company to take the phone-based stuff-tracking idea one step further. “We want to use other people’s phones to track your things, too,” he says. “And once everyone’s phones know who has which things, they can recommend some of these things to the phones of people who like similar things.” The many people who admire my sartorial style, for instance, will get a text message noting that everything I’m wearing today came from Target. And the phone will add that Target just happens to be offering a clearance sale on those very items.

Imagine! Thanks to our phones, not only will the network know where everyone’s stuff is, but it will be easier for all of us to envy and acquire each other’s things. Finally, a solution to that vexing lack of consumerism that has been plaguing society for so long. Just please leave my pants out of it. Though if your phone happens to spot them, please have it ring my phone. I’ve been looking everywhere.