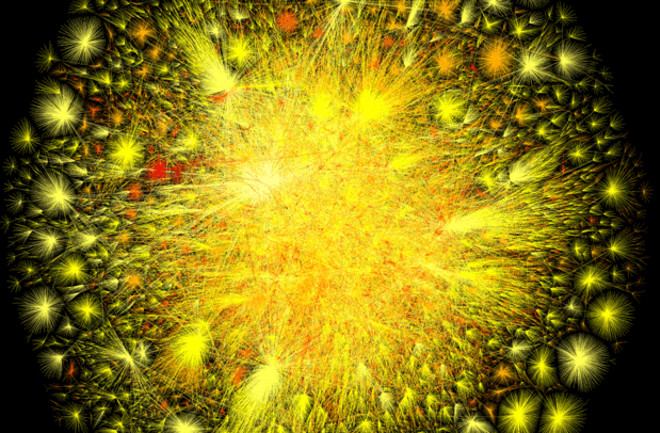 In 2004 Barrett Lyon’s friends bet him $50 that he couldn’t map the entire Internet in a day. Within two weeks the self-described technologist and entrepreneur had created a program that could output a detailed visualization of Internet connectivity in a few hours. Seven years and billions more Internet-connected devices later, Lyon is still at it. This cosmic-looking image, one of his newest creations, traces the millions of routes along which data can travel and pinpoints the hubs receiving the most traffic. Internet giants such as AT&T and Google manage the most heavily used networks, which appear here as glowing yellow orbs; they tend to concentrate in the center of the sphere. The less popular local networks (red) sit on the periphery. Although Lyon’s visualizations have appeared in computing textbooks and at the Museum of Modern Art in New York, he says he has yet to collect on his bet.