The Illusion of Star Wars Technology 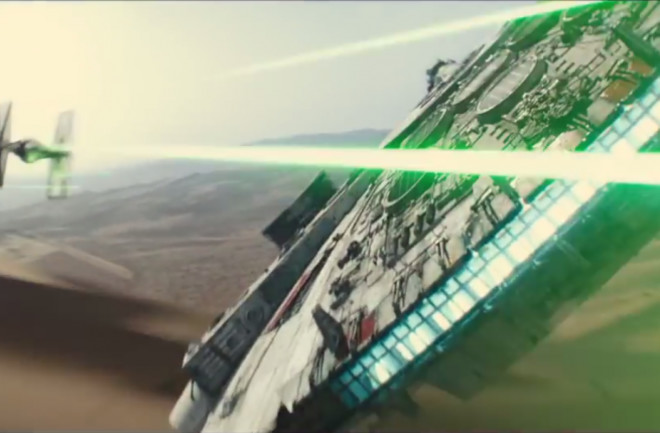 The first teaser trailer for the upcoming film "Star Wars Episode VII: The Force Awakens" treated viewers to the familiar sights and sounds of many science fiction ideas that moviegoers loved from the original trilogy: a hover vehicle skimming above the ground, a whimsical droid's beeps and bloops, a shot of X-Wings flying in formation, and the hiss of a lightsaber being revealed. Such technologies have inspired young girls and boys to become scientists and engineers, and have even helped spawn several U.S. military projects.

Yet the Star Wars films manage to dazzle us with their technological fantasies without having meaningful things to say about how technology actually works. Most Star Wars technology seems to exist in its own alternate dimension that defies both physics and common-sense use of technology. X-Wings perform maneuvers in space as though they were aircraft constrained by flying in Earth's atmosphere. Imperial TIE Fighters have giant, vision-blocking solar panels on their sides for no apparent reason. Stormtroopers consistently prefer to fire their blaster weapons from the hip rather than use their gun sights like modern soldiers. The fussy protocol droid C-3PO is doomed to shuffle along awkwardly despite the existence of high-mobility robot legs in the Star Wars prequel films. And Chewbacca's bowcaster weapon seems so wild from a design perspective that it might as well be shooting magic missiles.

The lack of real-world grounding or logic for much Star Wars technology shouldn't come as a shock for most people. Critics tend to describe the films as being "space opera" rather than "hard science fiction" because of the focus on drama rather than on creating a scientifically accurate universe with plausible technologies. The Star Wars stories set "a long time ago in a galaxy far, far away" could just as easily be transplanted to an alternate fantasy universe.

But a lack of technological realism has not stopped scientists, engineers and writers from having fun figuring out technical explanations for Star Wars technologies and their usage in the films. Popular Mechanics surveyed a number of "experts" to find out whether the Death Star could really blow up the planet Alderaan (Hint: Probably not). Wired has analyzed the Galactic Empire's questionable military tactics in failing to use its space superiority to destroy the Rebel Alliance base on the icy planet Hoth. PBS produced a video explaining why the spaceship combat seen in Star Wars and plenty of other science fiction stories makes little sense from a physics or military standpoint.

The teaser trailer for "Star Wars Episode VII: The Force Awakens" — the upcoming film that takes place after the original trilogy — sparked a flurry of online debate over whether a new three-bladed lightsaber that makes little sense from a design standpoint could still be justified by the "cool" factor. (Charles Choi, a science journalist who studies Japanese swordsmanship, provided a particularly sharp analysis of the value of sword cross-guards for Popular Science.) Even U.S. military projects have reflected our strong cultural fascination with the fantastical technologies of the Star Wars universe, as the Washington Post points out. President Ronald Reagan proposed the Strategic Defense Initiative, known more popularly as the Star Wars program, during the 1980s to intercept and destroy Soviet missiles. The robotic DEKA arm developed with funding from the U.S. Defense Advanced Research Projects Agency was nicknamed "Luke" in honor of Luke Skywalker's cybernetic hand. Occasionally, Star Wars can even stir grassroots movements among fans to recreate its fantastical technologies. One of the most striking examples was the "AT-AT for America" project in 2011 that aimed to build a real-life version of the huge robotic walkers first seen in "Star Wars Episode V: The Empire Strikes Back." That idea generated plenty of online enthusiasm and media coverage before Lucasfilm stepped in and put a stop to the idea due to intellectual property concerns.

So why do Star Wars technologies prove so alluring despite the lack of underlying realism or logic in many cases? Much of the credit goes to Lucas and his filmmaking team for using the sights and sounds of Earth technologies to make moviegoers believe in the Star Wars universe. Such moviemaking tricks create a vague sense of visual familiarity and realism in Star Wars technologies despite their otherwise fantastical designs. For instance, the space combat between dogfighting X-Wings and TIE Fighters may be nonsense from a physics standpoint, but their swoops, twists and turns deliberately evoke the aerial combat of World War II fighter planes. Star Wars creator George Lucas has described how he used gun camera footage from World War II aircraft as inspiration for the "space dogfights" in his films.

A blog post on the official Starwars.com website also points out the dialogue and visual similarities between the pivotal Death Star trench run in "Star Wars Episode IV: A New Hope" and the 1955 British film "The Dam Busters" about a real-life Royal Air Force bombing raid that destroyed several German dams during World War II.

The futuristic blaster rifles and pistols found in the hands of Star Wars heroes and villains used the designs and components of historical real-world guns, according to the Internet Movie Firearms Database. The familiar blaster rifles seen in the hands of stormtroopers were modified models of a British sub machine gun used by the British military from the 1950s to 1980s. Han Solo's trusty blaster pistol was based on a German semi-automatic pistol manufactured from 1896 through the late 1930s. (See my previous post for more on Hollywood's favorite science fiction guns based on real-life guns.)

Real-world technology's influence can even be found in the famous spaceship design of the Millennium Falcon. Cole Horton on Starwars.com points out that "greenhouse-style window" of the Falcon's cockpit bears a strong resemblance to the cockpit of the U.S. B-29 Superfortress. The latter was an aircraft that entered service during the later years of World War II and dropped the first atomic bombs on Hiroshima and Nagasaki. It's also worth noting that the German Heinkel He 111 bomber had a similar cockpit window design during the war.

The Star Wars films also lean heavily upon the sounds of real-world technologies to make the fantastical seem believable. Famed sound designer Ben Burtt created the sounds of speeder bikes in "Star Wars Episode VI: Return of the Jedi" by mixing the sounds of a P-51 Mustang and P-38 Lightning — both U.S. fighter aircraft during World War II. Burtt also slowed down the sound of the P-51 Mustang's engine in order to help create the iconic sound of the Millennium Falcon, according to the Starwars.com article. Anyone wanting to appreciate the P-51 Mustang's sound need only look to a classic scene from Steven Spielberg's 1987 film "Empire of the Sun," which features a very young Christian Bale whooping and hollering in glee as P-51 Mustangs swoop overhead.

Star Wars technologies may not have believable technical explanations for how they work, or even the most sensible explanations for how they're developed or used. But the overwhelming popularity of the Star Wars franchise shows that the films don't need technological realism in order to win over moviegoers. Instead, the best Star Wars films succeed when their technological fantasies support the storytelling from a visual and sound standpoint. For instance, the gawky, lumbering Imperial AT-AT Walkers that attacked the Rebel Alliance's Echo base on Hoth seem like poorly-designed robotic walkers from a practical engineering and military standpoint. But their towering, elephantine presence projects a certain menace that serves the Star Wars narrative of the gargantuan Galactic Empire trying to crush the Rebel Alliance underfoot.

By the same token, the lightsabers of Star Wars are almost pure fantasy as laser swords. But their iconic role in the Star Wars universe instantly gives moviegoers a storytelling frame of reference to understand the Jedi Order as the futuristic equivalent of future knights or samurai, bound by ancient codes equivalent to the ideals of chivalry and bushido. "An elegant weapon for a more civilized age," as Obi-wan Kenobi puts it. So it's OK that Star Wars doesn't really have much to say about technology. The films' fantastical visions don't have to be realistic to inspire scientists and engineers working in the real world to reach a little higher for something that might otherwise seem impossible. And I'll happily look forward to seeing how director J.J. Abrams tackles the next big chapter in the Star Wars universe in 2015, as long as he can continue to successfully maintain the illusion of Star Wars technology. If reactions to the trailers for "The Force Awakens" are any indication, some of that "Star Wars" magic is still alive and well.