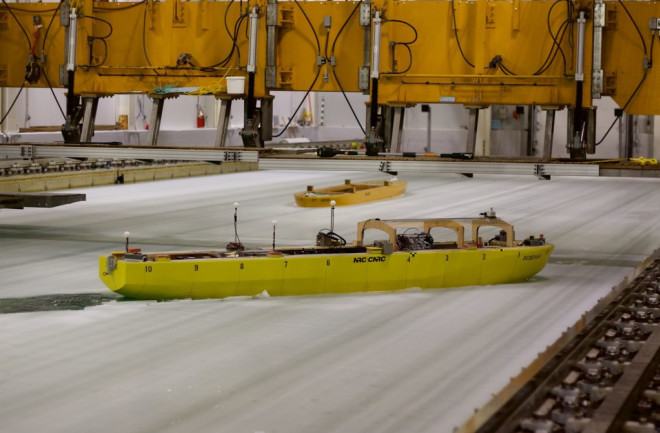 A demonstration of the icebreaking testing taking place at the National Research Council of Canada in St. Johns, Newfoundland and Labrador. Credit: CNW Group/National Research Council Canada Imagine your childhood bathtub playtime magnified into large model ships plowing through an ice-filled tank with a length that rivals the Statue of Liberty's height. That 300-foot ice tank in the Canadian city of St. John's is currently helping the U.S. Coast Guard conduct tests of different ship designs as the United States plans to end a 40-year lull in building new heavy icebreakers. The U.S. Coast Guard aims to build four heavy polar icebreakers as replacements for its single aging heavy icebreaker. Such icebreakers that can push or ram through thick sea ice and are necessary in performing patrol, resupply and emergency rescue missions near the Arctic or Antarctica. That is why the U.S. Coast Guard turned to the second-largest ice tank in the world owned by the National Research Council of Canada to carry out some preliminary test runs of icebreaker designs in miniature. The Canadian ice tank—295 feet long by 39 feet wide by 10 feet deep—can replicate sea ice conditions ranging from regular ice sheets to deep ice ridges, all based on decades worth of studies and research careers built upon figuring out how to model ice. "This tank is enclosed in a great big freezer, an insulated room with a very large capacity refrigeration system which allows us to take the air temperature in that room down to minus 20 degrees Celsius," says Jim Millan, director of research at the National Research Council (NRC) Canada. "What we’re trying to do is not only mimic the ships, but also the environment." In May 2017, the NRC ice tank carried out its first test runs for the U.S. Coast Guard and the U.S. Department of Homeland Security based on a prior partnership agreement. But getting ice tank testing just right matters for much more than the U.S. Coast Guard's future icebreaker fleet. It matters when a military wants to know if a nuclear submarine can punch through Arctic pack ice from below when it needs to surface. It matters for countries and corporations that want to operate ice-resistant oil rigs or generate power from offshore wind turbines in Arctic waters. And it matters for the Arctic ports and towns that have piers or wharves sticking out into icy waterways.

A Song of Making Ice

Much hard work goes into replicating Arctic sea ice conditions in the ice tank. Everything must be scaled down in size and strength. For example, some of the thickest Arctic ice sheets up to 8 feet thick would be represented by an ice sheet just 3.2 inches thick in a 1:30 scale model test. The NRC researchers typically start out by chilling the water to zero degrees Celsius and spraying a fine mist over the entire surface of the long ice tank tank, Millan says. That mist allows ice crystals to form in the -20 degrees Celsius air and fall onto the surface of the water to act as "seeds" for larger ice crystals to grow. Eventually the process creates an ice sheet with a fine structure that has thin needles of ice going all the way down through the sheet. Next, the ice sheet needs to be softened so that the ice strength is roughly equivalent in scale to the pushing power of the model icebreaker ships. Otherwise the model icebreakers might simply fail to push or ram through the ice and simply bounce off. The researchers blast the surface of the ice sheet with heat to soften the ice and alter the grain structure in a way similar to how fire is used to temper glass or steel. Real-life friction is replicated by a special paint applied to the model ships that gives them a "slightly rough finish" rather than coming out like a shiny new car from the factory. That's because a full-size icebreaker vessel would likely have a rougher hull that might involve rust or scraped surfaces. Those friction factors can mean the icebreaker would need more power to push through an ice sheet. One of the most work-intensive ice tank tests involves trying to replicate an icebreaker's ability to ram through sea ice ridges. Such ridges form in nature when two ice sheets push together and create ridge that both rises up and has even greater depth below the surface of the water. Sometimes such sea ice ridges can grow to about 65 feet thick. In the NRC facility, replicating the ice ridges requires a group of people go out onto the ice tank with saws to create a crack in the ice sheet. Broken pieces of ice get dumped into the crack and refrozen in order to roughly form the triangular shape of an ice ridge.

The NRC ice tank previously helped test designs for the U.S. Coast Guard's existing heavy and medium icebreakers, as well as icebreaker designs for the Canadian Coast Guard. The actual performance of the full-size ships has helped validate the ice tank's capability to predict their performance with the smaller model ships. So that validation provides confidence in the current ice tank tests intended to shape the future U.S. and Canadian Coast Guard icebreaker fleets. NRC researchers have been running the icebreaker designs through a number of different ice tank tests. One test involves having the model icebreakers push straight through the ice sheet in a straight line. Another test sees how well the designs perform in busting through the miniature ice ridges. A third test involves seeing how tightly the model icebreaker can turn in place—far from an easy task when wedged between solid sheets of ice in either the ice tank or in real life. Real icebreakers must keep carry out a "star turn" by repeatedly backing up and pushing forward a little to create room in the surrounding ice. Millan compares the maneuver to "watching someone who can't drive well turn around in the road."

The National Research Council of Canada, the United States Coast Guard, United States Navy, and theUnited States Department of Homeland Security Science and Technology Directorate are collaboratingto replace the Coast Guard’s polar icebreaker fleet. Credit: National Research Council Canada Such testing seems likely to take on new urgency as both the U.S. and Canadian Coast Guards attempt to replace their decades-old icebreakers with newer and more capable ships. A chorus of scientific and national security experts have warned that the U.S. in particular will need to replace and expand upon its existing icebreaker fleet as a warming climate leads to ongoing Arctic ice melt and increased ship traffic in northern waters. Icebreakers are needed to help scientists study the ongoing effects of climate change in the Arctic and Antarctic. But energy companies, fishing fleets and cruise ship lines may also increasingly depend upon icebreakers to pave the way as they attempt to navigate new Arctic waterways that remain strewn with hazardous icy obstacles. As a sign of the times, a Finnish icebreaker recently traversed the Northwest Passage in record time.

The most realistic way to test icebreakers involves taking an icebreaker ship out for a voyage and seeing how it performs. But there are downsides to that approach. First, not many countries can afford to spare expensive icebreakers simply to perform experimental test runs, which means engineers and ship designers must often make do with data collected from real-life icebreaker missions. Second, no country would likely justify sending an icebreaker ship and its human crew into the path of extreme and potentially dangerous sea ice conditions—scenarios that can be replicated safely and much more cheaply with model ships in an ice tank. Third, researchers cannot control for the ice conditions involved in real-life sea trials as opposed to the more highly-controlled experimental settings of an ice tank. A more popular choice for testing icebreaker designs involves using computer simulations. Such computer modeling can safely and cheaply replicate how icebreaker ships might perform in many different sea ice conditions. Even better, researchers have perfect control over the experimental conditions they want to test. But one downside is that the most powerful computers still don't have enough memory and processing power to fully simulate all the complex physics and forces involved with icebreaker ship hulls, water and ice. That means computer simulations typically focus on modeling just a small part of a given scenario—such as the point of impact when an icebreaker rams an ice ridge—rather than modeling the overall effect an icebreaking operation might have on the entire ship. Another downside is that simulations can make mistakes or imperfectly represent the reality of how icebreakers, ocean waves and ice sheets interact. Ice tanks represent a valuable middle-of-the-road testing grounds—or waters—for seeing how icebreaker designs might perform in real life. Unlike a real sea trial with a full-size icebreaker, ice tanks represent a much less dangerous and less expensive option of testing icebreaker model designs under all sorts of extreme conditions such as pitting an icebreaker against the "thickest ice sheet or testing the biggest wave that might be dangerous to a ship in real life," Millan explains. Like cheaper computer simulations, ice tanks can help researchers set up very controlled experimental scenarios. But unlike computer simulations, ice tanks operate in the real world without having to worry about simulating all the complex physics that exists. "The beauty of physical modeling and the reason it’s stood the test of time is you get all the physics for free," Millan says. "Because we’re developing an experiment using the laws of nature."