The Gut Worm You Want to Get

Roboticists from the Sant'Anna School of University Studies in Italy and the Intelligent Microsystem Center in South Korea have invented a way to make colonoscopies a lot less gut-wrenching. Doctors normally use tiny cameras attached to stiff cables to view the bowels while removing polyps, fixing ulcers, or performing other surgeries. All the poking and prodding needed to guide the camera can lead to considerable pain for the patient, however. So Arianna Menciassi of Sant'Anna and her colleagues have come up with a self-propelled robotic device (above), up to 71/2 inches long and three-quarters of an inch wide, that crawls along the colon like an inchworm. The head can swivel to follow the body's contours and to provide 180-degree views from a front-mounted video camera. Unlike cable-mounted cameras, which require delicate manipulation, the robot is controlled by a simple joystick. "Physicians don't need to know special procedures or special positions of their hands; they just need to drive the system like a video game," Menciassi says. Tests on cadavers show that the device works as well as a standard colonoscope for peering inside the lower intestine. Menciassi aims to have her device in clinical trials within two years. 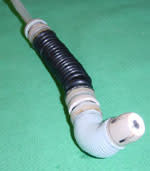