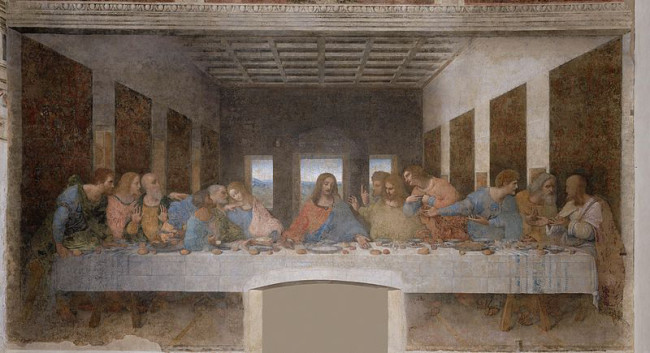 Leonardo da Vinci's "The Last Supper" has survived since the late 1400s on a wall in the Santa Maria delle Grazie Church in Milan, weathering centuries of change and intrigue, such as a World War II bombing. Worried about soiling from air pollution in the city, one of Western Europe's most heavily polluted, curators installed a ventilation and filtration system to protect it in 2009. The system worked well at reducing levels of fine and coarse particulate matter within the church (according to a new study), which should save the painting from worst effects of air pollution.But a significant threat remains: fatty lipids and organic compounds, such as those emitted from the skin of the 1,000 people that visit the painting each day. Researchers found elevated levels of lipids and organic compounds (including squalane) inside the chapel, compared to outside. These compounds can combine with soot and stick to and soil the painting, says University of Southern California researcher Nancy Daher. These organic compounds come from visitor's skin, fire retardants, cleaners, and even wax used in earlier restorations of the painting itself. The researchers recommend finding a way to reduce airborne levels of these chemicals, and plan to present their results next month in Milan. But how to do it—and whether or not to change the number of people allowed in—is up to the curators. Viewing of the painting is already limited to 25 people at any time for a maximum of 15 minutes each. Reference: Nancy Daher et al. Chemical Characterization and Source Apportionment of Fine and Coarse Particulate Matter inside the refectory of Santa Maria Delle Grazie Church, home of Leonardo da Vinci’s "Last Supper." Environmental Science & Technology, just accepted manuscript. Online November 2011. DOI: 10.1021/es202736a