The God of Thunder, and Momentum

Thor—Norse god, Marvel superhero, and Hollywood eye candy—presents those of us living in the real world with a few problems. Thor is a “demigod,” and any attempt to scientifically explore his otherworldly abilities can be dismissed as such. But with his resurgence in The Avengers last year, and seeing that today is Thor’s Day, the time has come to discuss in real terms his most prized possession: Mjolnir (literally, "that which smashes")—his hammer. 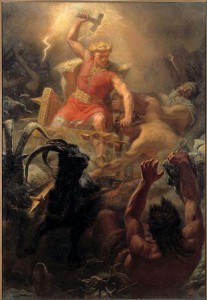 The argument about Thor’s hammer usually revolves around its role in Thor’s “flight.” Some argue that Thor can summon storms, and therefore wind, to keep himself aloft. Others point out that he merely keeps himself hovering by spinning the hammer like a helicopter blade. But the most common explanation is that Thor’s hammer, being tremendously massive, is used to propel Thor into the sky in a suitably beefy exhibition of momentum. In The Avengers and the comics, Thor’s main mode of transportation is spinning and then throwing the hammer, and hanging on for dear physics. With the help of Neil deGrasse Tyson, there are numbers and assumptions we can make to see just how demigodly you would have to be to wield such a power. With enough strength to literally toss billions of pounds around, you would be “worthy” indeed. The Amazing…Mass of Thor’s Hammer Recently, the world’s favorite astrophysicist tweeted this out to his million followers: 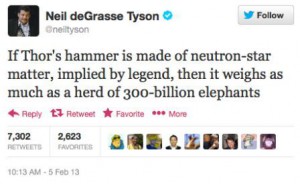 Neutron stars are the tiny (in astronomical terms) remnants of once massive stars. Though a neutron star could fit within the borders of Philadelphia, it’s not the size that’s important. A neutron star is so dense that a teaspoon of it would weigh about as much as a good-sized mountain. I’ll give NdGT the benefit of the doubt and assume that he made correct assumptions about the dimensions of Thor’s hammer. As for the weight, “a herd of 300-billion elephants” (of the African variety) would weigh in the neighborhood of A LOT. We are talking nine times the total biomass of the Earth. I guess those Chris Hemsworth muscles ain’t just for show. Now we have to invoke the demigod excuse a bit here, as it would be impossible to lift such a weight. Thor is “worthy,” so I guess he can lift it. But no matter how he can lift it, I sure hope he holds on, as something so dense would sink all the way through the Earth if he let it hit the ground. Conservation of Demigod Momentum It turns out that while nerds like myself have been arguing the mechanics of Thor’s flight, the comics have at least tried to resolve the issue: 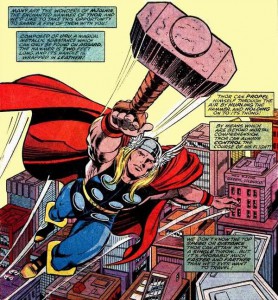 Of course, sometimes we see Thor fly in the comics without spinning the hammer and apparently he can control the flight of it with magic demigod powers, but we’ll stick to the explanation we can explore—throwing and then hanging onto Mjolnir. Any object with mass gains momentum as it moves. This value is simply the product of mass and velocity. Likewise, when an object with mass moves around some axis, it gains angular momentum. Both kinds of momentum are conserved. You don’t create or destroy momentum; you just transfer it from one place to another. Think of cracking two billiard balls together. When one travels towards the other, it has momentum. When it hits the other ball, some (or all) of that momentum is transferred and the other ball moves. Angular momentum is conserved in the same way. A figure skater can increase the speed of her spin by bringing her arms closer to her chest—by moving mass closer to the axis of her spin, speed increases to conserve momentum. Conservation of momentum also explains why Newton’s cradles work (they would go forever if they didn’t lose energy to heat and air resistance). Thor’s flight is a souped-up version of Newton’s cradle or the billiard balls. As explained in the comic panel above, the demigod takes to the skies by first hurling his hammer and then quickly grabbing onto the “indestructible” strap. Flight is only possible because momentum is conserved. If you spin some object around in a circle and then let go, it will fly off in a straight line from where you let it go. The path of the hammer will be some straight line coming off a circular path—a tangent—into the sky. So while angular momentum would explain the ridiculous energies and forces created by spinning the hammer, linear momentum will explain how Thor flies. Time for some numbers. The Marvel Wiki puts Thor’s weight at a massive 291 kilograms, or 640 pounds. And, I’ll assume that Thor can spin his hammer as fast as a major league pitcher can throw—around 100 miles per hour or 45 meters per second. If you let go of a hammer spinning at 100 mph, it will fly off in a straight line (at least until gravity takes over) at that speed. To calculate its momentum, we multiply its mammoth mass by this speed. The calculation results in 3.0*10^16 Newton-seconds of momentum (that’s a lot of zeroes). If Thor quickly grabs onto the hammer with this momentum, he adds mass to the system (his body+the hammer). If the mass changes, the velocity also has to change to conserve momentum. 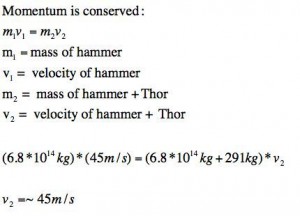 It’s an odd conclusion: the speed that Thor releases the hammer is the speed at which Thor and the hammer will travel. But it makes sense from the math. Because the hammer is so incredibly heavy, a tiny addition to its mass won’t slow it down at all. It would be like jumping onto a space shuttle while it’s taking off: with so much mass and speed, the addition of your tiny body won’t exactly change much. And you might have tested this principle for yourself. As a kid, that merry-go-round on the playground was only fun if you could get it spinning quickly first. Try as you might, no matter how fast it went, once you jumped on it would slow down. This is because the mass of the system increased, so the velocity of the system had to decrease. But in Thor’s case the hammer outweighs him by astronomical factors. The mass increases and the velocity decreases, but by an insignificant amount. 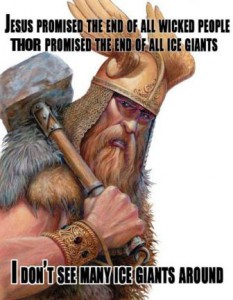 If you could throw something as massive as Thor’s hammer around, not much will stop it. Wind resistance and other factors would have a hard time slowing it down, making “flying” with it (more like hanging on to a ballistic missile) plausible. The kinetic energy alone is out-of-this-world huge. Throwing the hammer at 100 mph (45 m/s) gives it 688,500,000,000,000,000 Joules of energy. That is almost three times the yield of the largest nuclear bomb ever exploded, Tsar Bomba, which shook the Earth with an equivalent of 57 megatons of TNT. Needless to say, with this kind of energy, Tony Stark should have asked Thor to simply throw his hammer at the alien ship at the end of The Avengers and watched the fireworks. The only way around a mass heavy enough to sink through the Earth, and to pick it up and swing it no less, is to invoke the demigod excuse. But applying real-world physics to his flight only makes Thor that much more vándr bacraut (the closest I could find in old Norse to badass). Not only would he be able to “fly,” but Thor could nearly vaporize a mountain with a single throw of his hammer. Images: Tor's Fight with the Giants, 1872 by Mårten Eskil Winge, Comic Panel found on Scifi+Fantasy Stack Exchange—Can anyone identify the issue? Thor meme on Meme Center